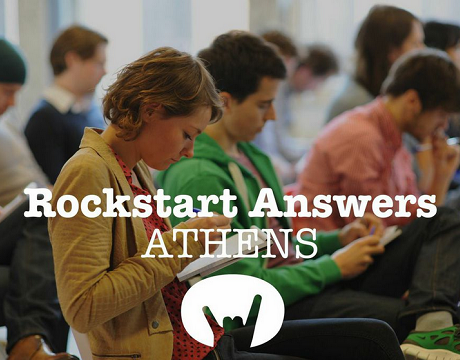 So far, events were held in 14 cities including London, Berlin, Amsterdam and Vilnius. Athens is the next in a series of European cities where Rockstart will stimulate knowledge-sharing among entrepreneurs. The first Rockstart Answers Athens event will take place on September 25, at 8.30am – 10.30am at Orange Grove.

Ioustinos Sarris, co-founder of sustainability gamification startup TheCityGame and advocate for entrepreneurship education in Athens, noticed its impact while he worked in Amsterdam. Soon after relocating to Greece he and his co-founders Fotis Merakos and Thomas Papaspyros decided to launch Rockstart Answers in their native Athens.

Sarris, Merakos & Papaspyros who are alumni of the 2013 Rockstart Accelerator Smart Energy cohort, will kick off Rockstart Answers Athens later this month.