According to Grant Thornton’s global survey “Women in Business 2022: Highlighting Diversity,” the percentage of women in senior management positions worldwide increased to 32%, compared to 31% the previous year. In fact, this percentage remained for the second consecutive year above the 30% milestone, which, according to surveys, is considered to be the minimum representation required to make a change in business decision-making process.

Regarding the impact of Covid-19 on Women in Business, almost 3 out of 4 companies worldwide (73%) agree that in their organization, the new working practices that have emerged as a result of the pandemic will benefit the course of women’s careers in the long term, with this percentage even recording an increase of 4 percentage points compared to the previous year.

At the same time, the percentage of businesses worldwide that did not take any action to ensure the principles of Integration and Equal Opportunities of Representation for both sexes in their working environment declined to 5% in 2022, compared to 8% in 2021, while it is characteristic that almost 1 in 2 enterprises (47%) carry out actions that promote work-life balance for their employees.Creating an environment where people can express their ideas, concerns and questions also remains high on the list of relevant actions, with 44% participation of companies.

“It is important for businesses to create a working environment in which the values of inclusion and equal representation take shape, thereby ensuring the creation of an inclusive society.At Grant Thornton we recognize the importance of these values, as 45% of our workforce now consists of women. At the same time, the percentage of women in Partners, Principals and Directors positions is 34%, while the corresponding percentage in the Management Committee of the company is 27%”, stated Vassilis Kazas, Managing Partner of Grant Thornton in Greece.

The most important findings of the survey “Women in Business 2022: Highlighting Diversity” for 2022

Women hold 32% of the highest management positions in business worldwide, with this figure recording an increase of 1 percentage point over the previous year when the proportion of women in senior management positions exceeded 30% in all geographical areas, with the highest rates recorded in Africa (40%) and Southeast Asia (37%). Also, 37% of businesses worldwide have a woman in the position of Chief Finance Officer (CFO), an increase of 1 percentage point over the previous year. Compared to the 2021 findings, the number of female Chief Executive Officers (CEOs) fell by 2%, to 24%, while the percentage of female Chief Operating Officers (COOs) remained stable at 23%.Finally, the percentage of women in senior HR positions worldwide increased by 1 percentage point compared to 2021, to 39%, remaining the position with the highest female representation rate.

How Women in Business is shaped in Greece

In Greece, the percentage of women in senior management positions recorded a drop of 5 percentage points in 2022, to 28% from 33% in 2021, while remaining at the second highest level since 2014. At the same time, the proportion of businesses that do not employ any women in a senior management position increased to 22% from 13% in the previous year. 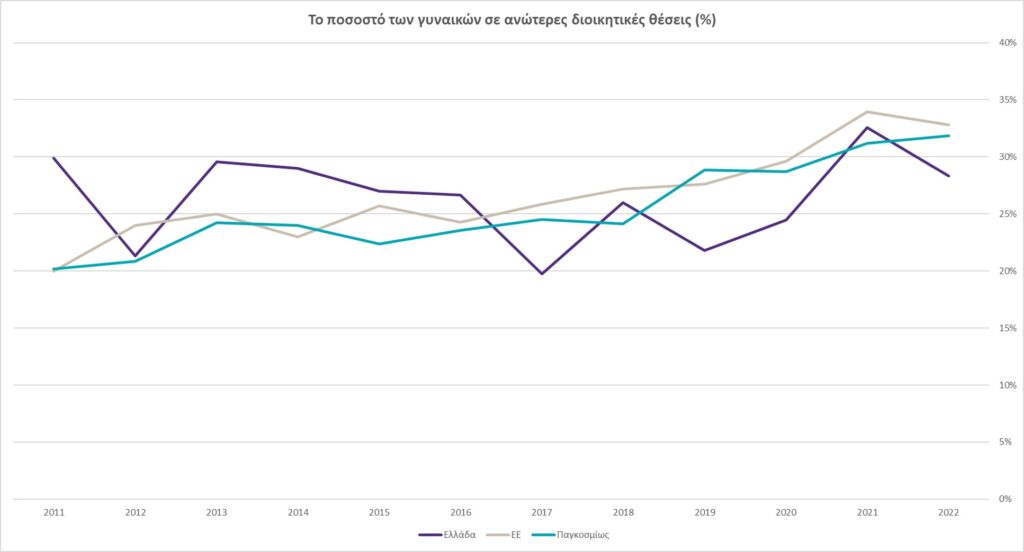 “The constant strengthening of gender equality at the corporate level is every year an important goal towards the creation and consolidation of a culture without discrimination and exclusion. Recently, Grant Thornton became one of the first companies in Greece to receive the SHARE Equality Badge, sealing in the best possible way our continuous efforts to promote the reconciliation between work and private life and our contribution to the formation of an inclusive and with equal opportunities society for all people.”, stated Mrs. Katerina Koulouri, Partner, Head of People Experience & Culture of Grant Thornton in Greece.

Greek companies say that the main actions implemented in the last 12 months to ensure the principles of Integration and Equal Opportunities of Representation for both sexes in their working environment are the promotion of work-life balance and the possibility of greater flexibility for employees (33%), the creation of an environment where all employees can openly express their ideas and concerns (27%), as well as the promotion of new working practices for the best possible involvement of employees (24%). 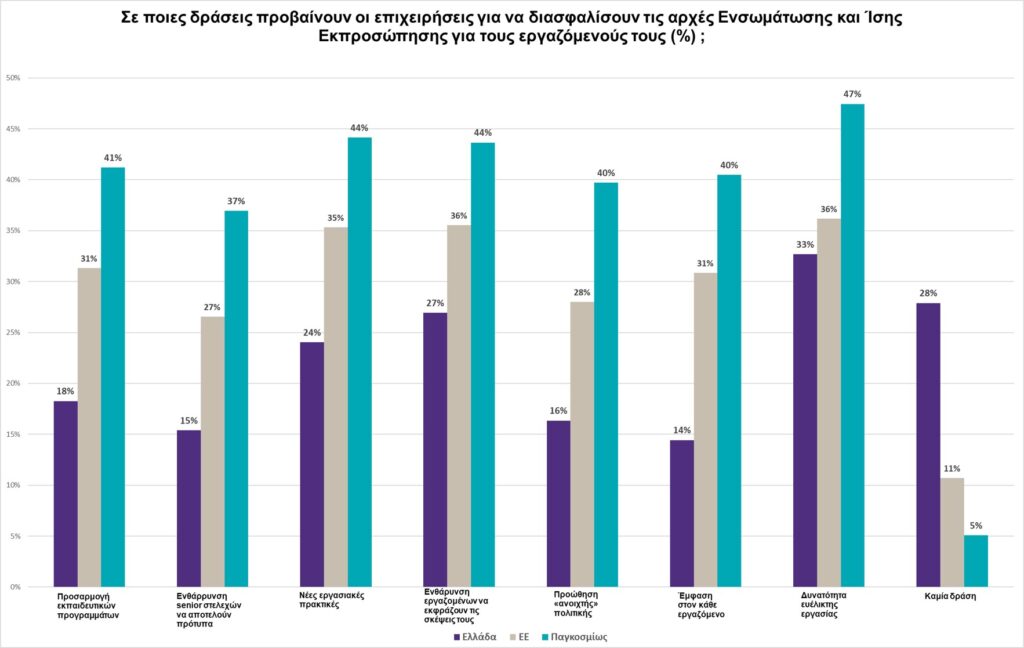 “Gender equal representation and respect for diversity in the working environment are now a key priority for any business that wishes to have a sustainable future.It is particularly important that the main actions of businesses to ensure equal opportunities concern the work-life balance, the free expression and the acceptance of the authenticity of employees, as they lay solid foundations for building a better future, with respect to the individuality of each person.”, underlined Mrs. Alexandra Baltouka, Partner, Head of Marketing & Client Experience of Grant Thornton in Greece.