On 26/01/2022, the 1st Online Event of the "Center for the Promotion of Startups" of the Municipality of Piraeus was held, entitled "Investing in blue innovation: Sectors, institutions, opportunities and funding challenges 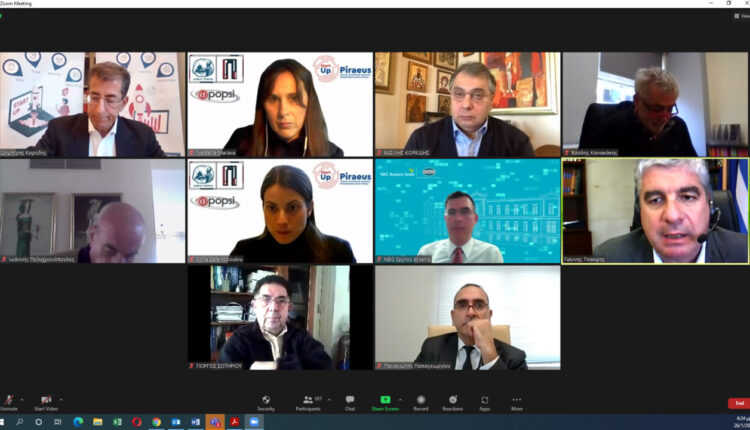 The aim of the open event, which was held online due to the restrictions of the pandemic, was to provide information to the existing and under establishment businesses of the Municipality and in general to the business community of the Municipality of Piraeus on the institutions, schemes and opportunities to support and finance blue innovation.

At the same time, there was a wide presentation of the actions of the “Center for the Promotion of Startups of the Municipality of Piraeus” towards the support of local Startup entrepreneurship.

Structures and initiatives focusing on Startups

The declaration of the proceedings of the open event, which was attended by more than 180 people, was made by the Mayor of Piraeus, Ioannis Moralis, who in his address, stressed among others: “The Center for the Promotion of Startups of the Municipality of Piraeus” is another pioneering initiative of the Municipal Authority to support Startup entrepreneurship in our city. We are a municipal authority that wishes to be part of the discussion on the development of entrepreneurship in the city of Piraeus, a fact that is reflected in our strategy since 2014 when we took over the Municipality. One of the main priorities of the Blue Growth Strategy of the city. One of the main axes of priorities of the Blue Growth Strategy of our city is the promotion of entrepreneurship and innovation of the city, such as the Entrepreneurship Support Center, the innovative “Blue Lab” workshop and a series of initiatives focusing on Blue Growth.

About a month ago, the presentation of the Centre for the Promotion of Startups highlighted the importance of the local ecosystem and synergies for the development of entrepreneurship. Today we are implementing our commitment to further actions for networking and developing synergies with funding bodies and support mechanisms for Startups in the country. The Municipality and the Center for the Promotion of Startups of the Municipality aims and will aim in the future at the interconnection of local entrepreneurship, chambers, academic bodies and credit institutions to support new ideas, give opportunities to young entrepreneurs in our city.

The Deputy Minister of Development and Investments, Ioannis Tsakiris, spoke about the huge footprint of the growth of Greek Startups on the Greek economy. He stressed that 2021 was the year that we were able to name the first companies in the Greek territory to reach the “unicorn” level as well as the huge interest of the international financial community for Greek Startups. At the same time, he pointed out that the new “innovate now” program for the financing of Innovation will be announced immediately.

Funding and support mechanisms for Startups

The Vice President of the Hellenic Development Bank, Pantelis Tzortzakis, referred firstly to the bank’s contribution to the development of innovation through the new hybrid financial instruments (e.g. innovation loan) that will be announced and secondly to the program to enhance extroversion and networking (InnoAgora).

The first part of the event ended with the statements of the Presidents or the representatives of the Chambers of Piraeus and other members of the local business community. Both the President of PCCI ( Piraeus Chamber of Commerce and Industry), Vassilis Korkidis, and the other representatives of the Chambers welcomed the initiative of the Municipality and stressed the importance of networking and synergies for the promotion of the Blue Economy. They pointed out that SMEs’ access to finance also requires networking, information and synergies.

In the second part of the event, the Lecturer of the University of Piraeus, Dr. Harris Agiropoulos, Assistant Professor of the Democritus University of Thrace, Thomas Poufinas and the President of Federation of the Hellenic Associations of Young Entrepreneurs Andreas Stefanidis, presented their views on the challenges and the funding opportunities of Startups.

More about the free services provided by the Center by submitting an online application here.