Flipps: Receives $2,4mn to Help Us Stream TV Content to Mobile Devices with no Additional Hardware

By EMEAstartups Last updated May 2, 2014 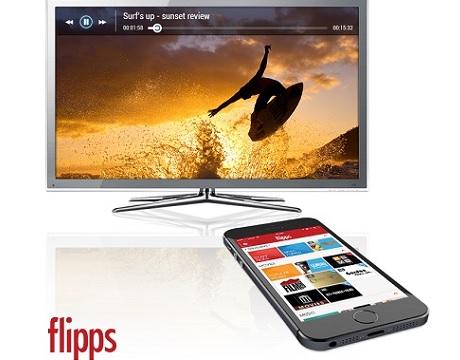 Flipps, a mobile app that helps users stream content from mobile devices to any nearby connected TV and vice versa without any additional hardware, announced a $2.4mn funding round from Earlybird Venture Capital and existing investors including famed Silicon Valley investor Tim Draper.

According to an official announcement, Flipps will use the investment to build on its growing business in the US and Europe while expanding its library of premium content.

Flipps holds a patent for its back end technology that allows users to magically ‘flip’ their content to the big screen. The Flipps mobile application is free and available on the App Store and Google Play.

According to the announcement, Flipps’ technology immediately works with over 250M connected TVs and is compatible with over 5,000 manufacturer models requiring no set up, no pairing of devices, no cables, no dongle and no set top box. Flipps has reached 10mn downloads of its mobile app and has amassed over 100 channels in its growing library of licensed content including popular online TV series like Back On Topps, hit Hollywood movies, and news from The Washington Post.

Startup from Leicester? Want to Grow but not Leave Midlands? Incubate is Up and Running