EYDAP: Partnership with OAED and the Municipality of Lykovrysi-Pefki to upgrade the Solar Village 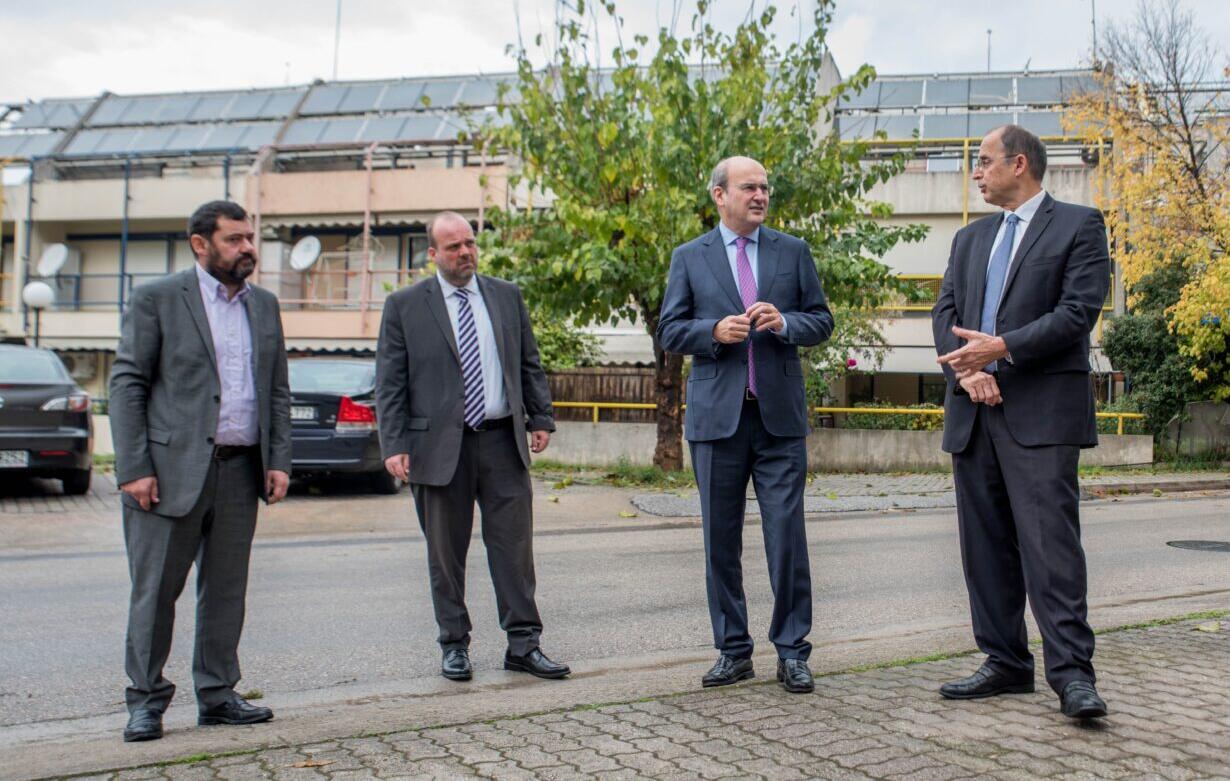 The programme contract was signed between the Municipality of Lykovrysi-Pefki, OAED (the Manpower Employment Organization) and EYDAP (the Water Supply and Sewerage Company), by the Mayor of Lykovrysi-Pefki, Anastasios Mavridis, the Governor of OAED, Spiros Protopsaltis and the CEO of EYDAP, Harry Sachinis in the presence of the Minister of Labour and Social Affairs, Kostis Hatzidakis. This contract ensures the final solution of the chronic problem in the sewage network of the Solar Village.

The programme contract provides for the expansion – reconstruction of the existing sewage network of the Solar Village by EYDAP in order to make it safe and functional and to achieve the receipt and maintenance of the settlement’s sewerage network by EYDAP.

The above will be constructed on the basis of a study carried out by EYDAP. The total project of 585,000 euros will be funded by OAED funds and is expected to be completed by the end of 2023. After the completion of the construction and the maintenance period, the ownership and management of the network will pass to EYDAP.

“The signing of the Programme Contract between OAED, EYDAP and the Municipality of Lykovrysi-Pefki comes to finally provide a solution to this unacceptable problem faced by about 450 families in the social housing settlement “Solar Village”. Apart from that, it also has a special symbolism because the Settlement was made a few decades ago as an innovation project in relation to energy saving and environmental protection. From then on, unfortunately, serious problems were observed in the daily life of the residents. In the Ministry of Labour and Social Affairs we will be next to the Municipality of Lykovrysi-Pefki, so that we can face together the rest of the problems that the residents face.”, said the Minister of Labour and Social Affairs, Kostis Hatzidakis.

“It is a very important day for our Municipality, as a big problem of decades for the residents of the Solar Village finds its solution and without burden for them or the Municipality. Based on the programme contract signed by OAED, which is the universal successor of OEK (Workers’ Housing Organization) it finances EYDAP, which has the know-how to carry out the project. As a Municipality all this time we put pressure towards every direction and promoted the solution and I would like to thank the Governor of OAED Spyros Protopsaltis, the CEO of EYDAP Mr. Harry Sachinis, the service agents of the two Organizations for the excellent cooperation and the satisfaction of our requests. In particular, I would like to thank the Minister of Labour, Kostis Hatzidakis, who is once again acting in order to resolve faster an issue of our Municipality.We will continue to closely monitor the implementation of the project until the final resolution of the issue with the sole concern being the quality of life of the citizens of the Solar Village.”, stated the Mayor of Lykovrysi-Pefki, Anastasios Mavridis.

“Another chronic pendency of OEK, which unfairly afflicted the residents of the Solar Village, is heading for a final solution, thanks to the cooperation and coordinated actions of all stakeholders. Our goal is to effectively address one by one all the “burdens” and pathologies of the past that OAED inherited and to put an end to the suffering of the beneficiaries. I would like to thank the Minister for his will to initiate the resolution of the problem, as well as the Mayor and the CEO for the excellent cooperation.”, noted the Governor of OAED, Spiros Protopsaltis.

“The programme contract with the Municipality of Pefki gives EYDAP the opportunity to implement an important infrastructure project that will substantially upgrade the quality of life in the area. We work with all stakeholders to achieve the best result at a fast pace. We are very pleased as we will be able to solve the long-standing sewerage problem in the Solar Village contributing to a sustainable next day. Armed with the high expertise and quality of EYDAP’s work, we will give residents the opportunity to enjoy the services of our company. We warmly thank the municipal authority of the Municipality of Lykovrysi – Pefki and the leadership of OAED for the decisive management of the issue that will improve the everyday life of our fellow citizens, so we start immediately the implementation. We prioritize public health and upgrading the areas in which we have activities.”, commented the CEO of EYDAP Harry Sachinis.