By EMEAstartups Last updated May 7, 2014 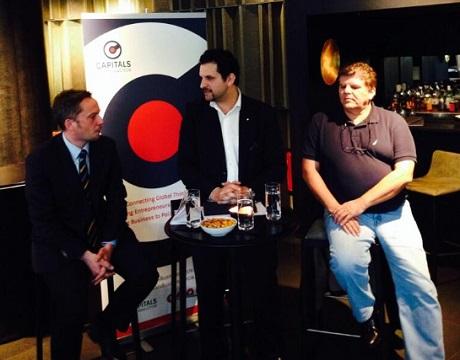 CAPITALS Business Circle, a high-level network for businessmen and diplomats EMEAstartups.com has presented before, held recently in Berlin a discussion forum about the status of entrepreneurship in Europe. Titled ‘Trends & Perspectives of Entrepreneurship in EU. Which should be the EU Strategy about Entrepreneurship after the coming European Elections and what can Europe learn from Silicon Valley?’, the forum hosted Bernd Hüttemann (General Secretary, European Movement – Germany) and Axel Schultze (CEO Society3 Accelerator, Entrepreneur and Investor from Silicon Valley with experience from EU Institutions, former advisor of one of Linkedin’s Co-Founder).

The two speakers expressed two different and opposite opinions, provoking a substantial discussion.

Schultze claimed that Silicon Valley cannot and should not be copied. “EU is slow, heavy, intervention-oriented”, he stressed out, although he said he believes there is creativity and potential but the Government and EU should leave the companies alone to create.

“In Silicon Valley there is no state intervention and regulation; that is reason it is successful. Berlin is a great city with a great scene and great potential. EU should create its own system. There is enough capital in the private sector. There is no need for EU or Governments to create their own state funds. There is a lot of talent in EU but there is a need for deregulation“, was Schultze positions.

On the other hand, Hüttemann expressed almost the opposite. “EU has made progress, EU is very liberal, modern and pro private sector“, he said adding that many private sector oriented initiatives are EU Commission’s initiatives such as Single Market.

“There is a need of a balanced regulation and support of the Governments and a right but simple framework; not a complicated one. Politicians should be more close to reality”, he concluded.

The forum attended diplomats, representatives of business associations, senior level businessmen, who had the time to ask their own question and engage in an interactive networking session.

CAPITALS Business Circle hosts its next event on May 20th. Titled ‘Can Berlin compete with the other Tech Hubs? Insider view on the perspectives of Berlin Tech-Digital scene‘ it features investment banker J. Riedlbauer.