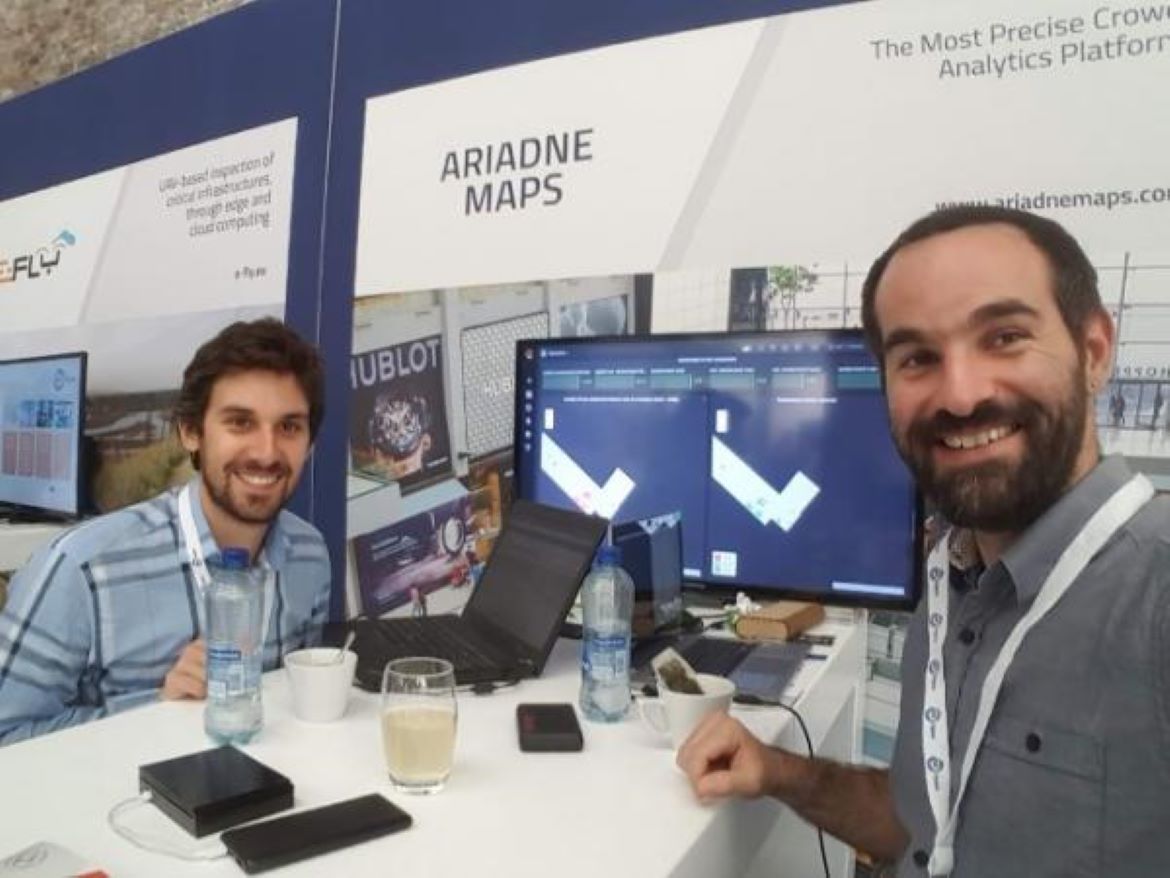 It is considered as the Google analytics of the natural world and as a modern Ariadne promises to change the philosophy of indoor location tracking, in real time while protecting the privacy of individuals. Ariadne Maps came two years ago to transform the way real estate operators such as chain stores and malls, transport stations, airports, and other organizations obtain data on the behavior of their visitors, in real time, without a network connection, without cameras and without applications and, most importantly, using technology that respects the laws on the protection of personal data such as GDPR in Europe, CCPA in California and PIPEDA in Canada, something that no other mechanism does.

The company today, which has secured with 2 patents in Europe and the USA the new technology it applies (while another 2 patents are in progress), operates throughout Europe, but also in the Middle East, Singapore, Chicago, while it is expected to reach Antarctica, surpassing leading tech giants in the industry, such as Google, IBM, CISCO, and Samsung, in terms of accuracy.

The greek-inspired startup, which is a spin-off of the Technical University of Munich, a few days ago was of great concern to the greek and international press, when it announced the completion of a seed investment of 2 million euros led by Marathon Venture Capital. The first contact of greek entrepreneurs with investors was through Linkedin!

Georgios Pipelidis (CEO) and Nikos Tsiamitros (CTO), the two greek creators of the company from Veria, speak exclusively to startupper.gr, from Munich, about the big investment, the company’s vision, the market in which Ariadne operates and about the role it will play in it in the coming years, as well as for the company’s presence in Greece.

Startupper: Ariadne is already funded by the fund of the European Institute of Innovation and Technology (EIT Digital), but the recent investment of 2 million euros was a subject of discussion. Tell us a few things about how you got here.

Georgios Pipelidis: The discussion with investors began in November 2020, in the midst of a pandemic, lasted three months and ended in February 2021.But we spent another six months before we sign due to bureaucracy in Europe and the involvement of the European Institute of Innovation and Technology (EIT Digital) which has a non-profit economic form. Unfortunately along with the valuable time we also lost a significant advantage because we, as a company, were not affected by the pandemic and we could have taken advantage of the funding earlier in order to grow, when the markets were still closed due to Covid-19.

Startupper: Let’s take things from the beginning. How was Ariadne born and what was the inspiration for the name?

Nikos Tsiamitros: While we were preparing our doctoral dissertation at the Technical University of Munich in the field of robotic navigation, we came into contact with several brick and mortar companies and several organizations and found that they needed digital solutions that would record and analyze the traffic of their space in real time, that help them understand the flow of people, but also evaluate consumer behavior to provide the best experience for their visitors, but also optimize their assets with the right critical decisions. The solutions they had at their disposal until then (such as cameras, navigation applications that required infrastructure and facilities, cell towers, etc.) had several limitations in their implementation and some had limited potentials. We simply use the smartphones that everyone carries with them. Ariadne devices installed in the area of interest use the signals of users – visitors emitted by smartphones (GSM, LTE, Wi-Fi or Bluetooth) and special artificial intelligence algorithms to offer analytics and basic information about physical spaces in real time, which are processed anonymously. We respect privacy and produce analysis of site traffic without violating customers’ personal data. The inspiration came naturally from the myth of Ariadne and Theseus, where Ariadne’s thread, which could be described as a precursor navigation device, helped Theseus to find the exit through the Labyrinth of the Minotaur. For the American audience I would like to recall the film Inception where a contemporary Ariadne, postgraduate student at the École d’Architecture in Paris, has as her mission to design three complete labyrinths to be used by Cobb (Leonardo DiCaprio).

Georgios Pipelidis: Ariadne was born with a mission to provide physical stores with the advantage, that so far only digital stores have,of  taking analytics accurately and then guiding for appropriate data-driven decision-making.However, our vision does not stop there. We envision that Ariadne will become a platform that will facilitate a range of technologies such as robotics, augmented and virtual reality, etc. Imagine a robot asking for its place from Ariadne, that is from the same platform that a firefighter can use in a dangerous situation to determine whether a building has been completely evacuated or not, or an indoor designer to make decisions related to product placement on a daily basis. Imagine drones flying indoors to investigate security at various points inside or outside the building.

Indoor location tracκing has a wide range of applications. In maintenance, for example, where locating a damaged piece of equipment is vital for companies with huge infrastructure or at high-traffic airports where identifying passenger bottlenecks can lead to strategic redesign and better management of workers. In retail environments, anonymous monitoring of consumers can lead to a new understanding of their behavior, but also in dynamic environments such as exhibition centers or events, powerful technology to guide visitors or track traffic is more than necessary.Accessibility is a human right and sometimes a critical need, as for people with visual impairments, for example. The possibilities of using Ariadne are endless.

Startupper: How do you see the market you’re moving in and the role your company will play in the coming years?

Nikos Tsiamitros: Traditional tracking methods use global navigation satellite systems (GNSS), such as Galileo, GPS and GLONASS. However, these have limitations when it comes to indoor spaces, since signals cannot penetrate solid objects such as metal ones that are often found inside walls. With human kinetic models, with state-of-the-art machine learning models, with new sensor fusion and the most advanced anonymization techniques, Ariadne’s technology is able to provide high detection accuracy indoors. It is obvious that its technology can be largely valuable for a multitude of industries. We stand on the impact that it can have on three sectors, starting with the retail industry and specifically the planning of staff employment, where an employer will be able to employ its employees based on the time periods that receives more visitors to the store and not when it has the most sales. In this way, he will be able to increase the number of sales and consequently his turnover instead of constantly trying to reduce his expenses. In physical marketing as well. Imagine someone receiving a discount notice when visiting their favorite stores or even when standing next to their favorite products instead of receiving this notification at times when he has no interest in these products. Finally, product placement and pricing. Imagine if the shopkeeper knows which products the customer sees and buys and in what order. Ariadne will allow retail industry leaders to determine the popularity of each product and its association with its sales. Imagine now the value of receiving this information for the thousands of products of a store in real time and its utilization to increase sales due to better product placement. However, Ariadne can also be useful in the transport sector, where, for the first time, different transport agencies will be able to allocate the revenue generated by different companies in the same locations for the first time. Similarly, in the field of “smart cities”, for the first time it will be able to quantify marketing in tourism campaigns.

Startupper: What stage is the company at now and how much has it grown?

Georgios Pipelidis: Ariadne has grown attracting a multitude of global partnerships with companies such as Ferrovial, which manages Heathrow Airport, IOTA, which is the most successful German cryptocurrency company, Deutsche Bahn, which manages German public rail transport, NOKIA, which is researching new technologies and the potential use of 5G networks, IKEA, that continues to lead the furniture retail sector, Praktiker, a retail company for household improvement, etc. Ariadne has also begun a discussion with the European Space Agency (ESA) and Dr. Stefan Schneider for the adoption of technology at Concordia research base in Antarctica. We also plan to provide navigation to the visually impaired in partnership with the Münchner Verkehrsgesellschaft, the municipal company responsible for public transport management in Munich. At the moment we have offices in Germany, where we employ 13 people, in Singapore with 3 people, in America with 1 person and of course in Greece, in our hometown of Veria where we employ 4 people.