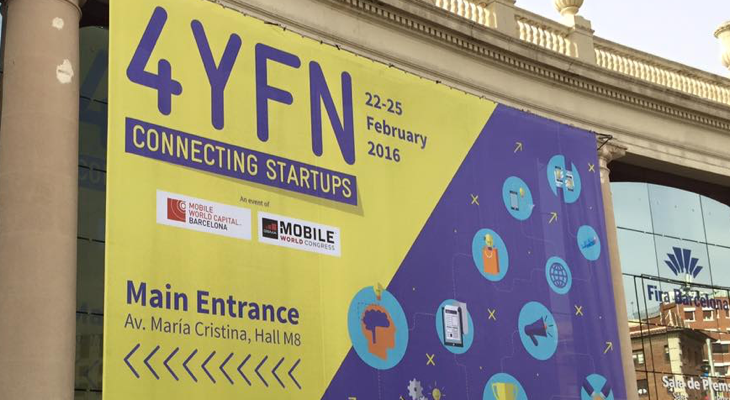 4 Years From Now (4YFN) the global business platform for the growing community of technology startups, supported by Mobile World Capital Barcelona (MWCB), along with the GSMA Mobile World Congress, opened the doors to its third edition, boasting the presence of more than 400 startups and Spanish and international exhibitors at the Innovation Market.

Rich Miner, co-founder of Android, Inc. and an investment partner at Google Ventures, and Mike Butcher, Editor-at-large of TechCrunch, hosted the opening of 4YFN with a fireside chat at which they talked about Miner’s professional career. Israel Ruiz, Executive Vice-president and Treasurer at the Massachusetts Institute of Technology (MIT), and Niklas Zennström, CEO of Atomico and co-founder of Skype, were two of the prominent speakers on hand. This first day, centring on the thematic pillar of “Disrupted by Mobile,” featured some 50 talks and workshops, three Founders & Investors sessions (meetings between entrepreneurs and investors) and two Pitch the Press sessions (“speed dating” encounters between journalists and entrepreneurs).

Thing Thing App won the 4YFN Awards’ first startup competition, focused on the Disrupted by Mobile thematic pillar. The project presents a virtual keyboard for mobiles that furnishes access to photos, documents, calendars, etc., while chatting or writing an email. This afternoon the eight finalists presented their projects on the Banco Sabadell stage.

The winner of the Global Mobile Innovators Tournament, a competition organised by IBM and 4YFN was Grindbit. The startup, one of the five finalists in the Smarter Healthcare category that presented their initiatives today on the Mazda stage, proposes a headband that helps to monitor the user’s nocturnal movements and jaw and teeth pressure.

A forum for hackathons

This first day also saw the launch of La French Tech [email protected], the La French Tech initiative promoted by the French Ministry of Foreign Affairs to foster the creation of startups abroad. Over the course of the three days 34 students, engineers and entrepreneurs, forming nine teams, will work to present a prototype for the most disruptive connected device. A connected pillbox, jewellery that functions as a “guardian angel,” and a virtual reality suit are three of the IoT projects being developed starting today at the La French Tech stand. This first day of the hackathon saw a visit by Muriel Pénicaud, CEO of Business France, the agency for the international development of French companies, who also participated in the first Founders & Investors and Pitch the Press sessions.

Imagine Express, the hackathon where 36 participants develop app projects on a train for 4 days, has once again chosen 4YFN as its last stop. After completing its Barcelona-Paris-London route, the teams, formed by a developer, a creative professional and a business expert, presented their projects on 4YFN’s Lavazza stage.

In order to further promote interaction amongst all participants, today the event launched the 4YFN Social Coin, a token through which attendees can interrelate and create links resulting in new business opportunities. In addition to all the activities designed to generate networking, attendees have access to an extensive line-up of presentations over the next two days.

4YFN’s activity continues tomorrow, Tuesday, with appearances by Mark Shuttleworth, the founder of Canonical and co-founder of the company that has developed Ubuntu; Werner Vogels, CTO and Vice-President of Amazon; and Dirk Ahlborn, CEO of Hyperloop, who will take the stage at 4YFN to give their respective talks.

Speakers on Wednesday the 24th will include Nicola Mendelsohn, EMEA Vice-president for Facebook, and Jimmy Wales, the co-founder of Wikipedia and CEO of the social network TPO.

4YFN gathers 12,500 attendees and reaches 5,200 meetings between entrepreneurs and investors