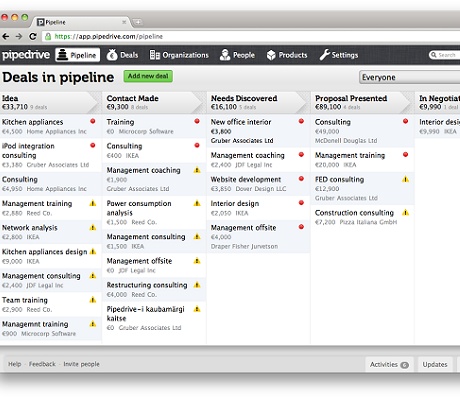 The amount of 9 million dollars in a Series A funding was raised from Pipedrive, a cloud-based sales software that helps small companies manage and increase sales. The funding process was led by Bessemer Venture Partners and had the participation of Paua Ventures, Rembrandt Venture Partners and AngelPad. Today, Pipedrive has more than 10.000 small business-customers, which exploit the benefits of using a simple, intuitive approach in order to sell better by visualizing the sales pipeline. The company aims to ‘fix’ the… broken CRM and sales software experience, since those kind of solutions typically require far too much data entry and have poorly defined workflows, resulting in software that nobody likes using and lose sales. On the other hand, Pipedrive’s SaaS solution takes a more visual approach with a dashboard that shows deals in a pipeline from an initial contact, to contract negotiations to done deals. It is noted that Pipedrive’s solution is used by at least 100 companies in Greece.