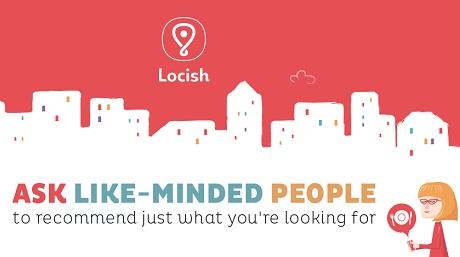 Locish, a Q&A mobile app founded in Athens, Greece, announced plans to re-launch following a cash injection of $820k from VC’s. The money raised is being used to overhaul the app’s functionality and create a brand new look and feel – enabling users to ask like-minded people for real-time recommendations on new places to eat, drink, and have fun – across iOS and Android devices.

The seed-funding round was led by the Odyssey Jeremy Partners fund, with participation from Jeremy Open Fund II (both are greek VC funds operating under the European Commission’s JEREMIE program) and three Silicon Valley-based of Greek origin angel investors. According to an official announcement, the money raised is being used to overhaul the app’s functionality and create a brand new look and feel.

Locish debuted in March 2013 with the sole intention of offering travellers personalized recommendations from local people; helping them experience a new city with an insider’s perspective avoiding tourist traps. However, it quickly became clear that locals were also keen in using the app to find places of interest on their doorsteps.

Towards this direction, Locish’s founders grew their team and are now working hard altogether to build on the previous version of the app in order to effectively leverage on the new opportunity raised. Locish is now an extended community, no longer restricted to the travel audience. It is a community of users that are eager to share information and exchange experiences with those who have the same tastes as them. Locish is about connecting like-minded people who help each other to discover new places through tailored recommendations, free from noisy, ambiguous reviews and time-consuming Internet searches. Locish enables its users to find what they are looking in real time and in a social, and interactive way.

The new and improved version of Locish will be officially launched in New York City, San Francisco, and Athens (Greece) in May.

To be among the first to experience all-new Locish as soon as it launches, all interested can submit their email address on the new redesigned website: www.locish.com.

FIA Athens 2014: How Could Europe Grow its Own Silicon Valley