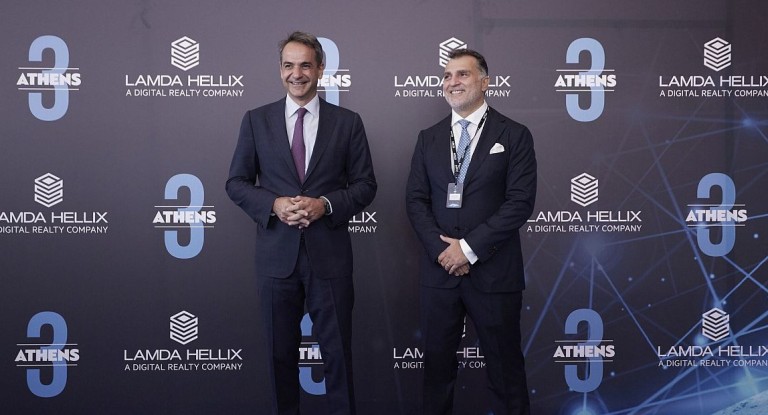 A vote of confidence in the great effort that – as he said – Greece is making to be at the forefront of the digital transformation of its economy, characterized the Prime Minister Kyriakos Mitsotakis the new investment of Lamda Hellix in Koropi at the event for the beginning of construction of the new Data Center.

“Indeed in this field we have already done very important things in providing services to citizens and businesses. I am particularly pleased every time a greek citizen, a businessman, recognizes how many working hours he has saved because he can now carry out basic services from his computer, from the mobile phone, instead of going to a public service.”

The Prime Minister made a flashback to the recent past and mentioned that the Data Center Athens 2 actually started its operation in mid-2015, a few days before capital controls were imposed. “And today, in 2021, we are here to establish a much larger Data Center Athens 3. We hope that Athens 4 will follow very soon. I would like you to reaalize how much Greece has changed in these six years since the operation of the second Data Center until today that we are here for this very important new investment of the company”, said Mr. Mitsotakis.

The Prime Minister added that our country today is a country that is open to foreign investors, with a stable tax system, with an investment environment that attracts foreign investments. “A country that has launched for good, thanks to the initiatives of the Ministry of Digital Governance, our great digital transformation so that we can now be able to attract such investments and become a country that can welcome infrastructure investments for the new digital economy”, stressed Mr. Mitsotakis.

The digital transition is a fundamental pillar

The Prime Minister described the digital transition as a fundamental pillar of his government’s policy and that is why, as he said, significant resources from the Recovery Fund are used for many digital transition actions, many of which have to do with digital infrastructure.

At the same time, he focused on the new jobs that will be created and noted: “We are talking about many well-paid jobs in the digital economy ecosystem.With more and more investments, the employment prospects of young greeks are also improving, new ways of return are opening up for those who left Greece in the last 10 years, looking for a better future abroad, and I believe that you too will put your own stone so that the country can re-attract this human resources from abroad, offering many well-paid and with good prospects work in your own business as well”.

The Prime Minister saw the new facilities with the President and CEO of Lamda Hellix Apostolos Kakkos, the Chief Investment Officer, Digital Realty, Gregory Wright and company executives. At the same time, he talked with the executives and technicians who were in the UPS Room, the Technical Operations Center and the operating areas.

“A historic day for the business community”

“I want to thank the Prime Minister Kyriakos Mitsotakis and his ministers for their cooperation. This is a historic day for Greece’s business community. Some of the most innovative project data centers in Europe are already in place in the country. Today we are laying the foundations for the promotion of Greece as a key investment hub in the region. Greece is a great country and its future looks bright”, noted, among others, the CEO of Digital Realty, William Stein.

“Athens is a city that is now emerging as a hub of connectivity. A crossroad to Europe, Africa, Asia and the Middle East. Looking to the future, from 2022 onwards, we look forward to our partnership with Lamda Hellix and the greek government, with the aim of further strengthening the commitment to our customers and the greek people. As part of our commitment, today I announce that Digital Realty will provide 100 million to organizations and initiatives that will strengthen efforts to alleviate the consequences of the fires that broke out in the country in the summer.”, noted, Digital Realty’s Chief Investment Officer, Gregory Wright.

“I am happy because Athens 3 will not just be a new data center, it is the largest data center in Greece, part of the largest hub in southeastern Europe and it is the way with which we are having a positive impact, accelerating the digital transformation of Greece.”, stressed the President and CEO of Lamda Hellix, Apostolos Kakkos.

The company employs 60 people and is expected to double the number soon. Digital Realty supports world-class businesses and service providers by offering a comprehensive range of data center, colocation and interconnection solutions. It is the largest and most interconnected carrier of neutral service provider of multi tenant data centers in Greece and Southeastern Europe.Digital Realty has already made and is planning very important investments in our country, in order to make Greece, through Lamda Hellix, its twin of investments in Marseille, so that it can better serve its customers at a local level as well as its international customers who do not yet have a presence in Greece.

At the same time, through the creation of Data Gravity in our country, it looks forward to attracting a significant number of international submarine fiber optic cables and international telecommunication providers, resulting in an increase in the availability, speed and quality of telecommunication services in our country, while at the same time the Balkan and Central and Eastern European countries will be better served through Greece.

The acquisition of Lamda Hellix is the largest acquisition of a technology  company in Greece and one of the largest acquisitions of a greek company regardless of the sector of the economy. Athens 3 within the data center campus in Koropi, will be the largest data center in the country. It will have a capacity of 6.8MW, greater than the capacity of all the data centers in operation in Greece, while it will be able to house more than 50,000 servers. This investment is more than 70 million euros and will be completed by the end of 2022. At the same time, it submits the plans for the approval of building conditions for Athens 4, within the data center campus, which is an additional data center of equal capacity (6.8MW) with Athens 3 with the amount of the investment being the same as Athens 3.

The company studies the design and construction of additional data centers, both in Attica and in Northern and Southern Greece. According to a study by the international research company IDG, the added value generated by every euro of investments in multitenant data centers, exceeds 8 euros. Consequently, the added value from the new investments in Athens 3 and Athens 4 will significantly exceed 1 billion euros.