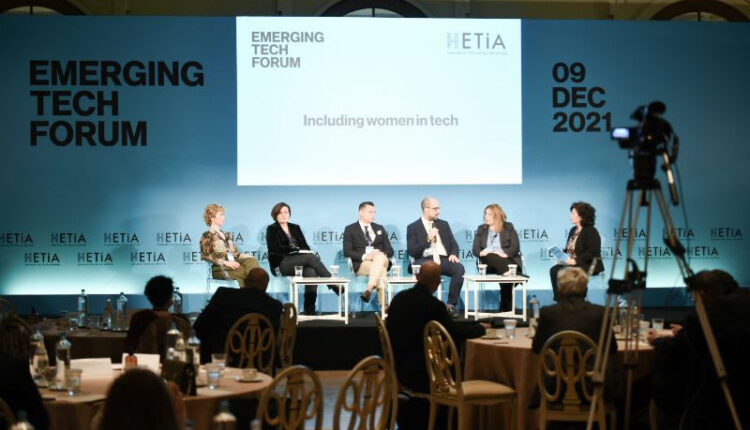 “Including Women in Tech”, a discussion on the position and inclusion of women in the field of technology, took place in the framework of a high-tech forum organized by HETiA in collaboration with Tsomokos, at a central hotel in Athens.

“The government has gender equality issues very high on its agenda, which proves it in practice. The economic independence of women and their participation in the economy are important elements for both equality and the robustness of a state.”, said Maria Syrengela, Deputy Minister of Labour and Social Affairs, in charge of Demography and Family Policy and Gender Equality.

“We don’t want to talk about gender equality in theory, we want to do programs that help women in their daily lives,” the Deputy Minister said.

Finally, Mrs. Syringela stressed that the issue of equality and inclusion of women in the workforce is not only a question of human rights, it is also a developmental issue for a country.

Kelly Damalou, Product Manager, Ansys, noted that a supportive environment is needed so that the workforce can train and unfold their skills. She added that a woman has to try harder to convince of her job, of her worth and of her dedication.

On the number of women in technology companies, she said the goal is that at least the percentages of women seen in universities in the respective STEM schools should be the same in the working environment.

She stressed that at IBM they consider their human resources as the company’s largest asset and added that among the goals they have set is to attract young children and girls to the field of technology as well as brain regain.

Vassileios Velkos, Tech recruitment consultant and Co-Founder, Code.Hub, said that the connection of universities with the market is a key issue in a modern economy as one of the main obstacles that young people encounter today when looking for a job is the lack of specialized knowledge.

It is characteristic, as Mr. Velkos pointed out, that more and more companies are asking for the diversity of their workforce to increase, as research has shown that it is largely linked to the proper functioning of a company and its profitability.

As he said “technology has space for everyone” and added that it is particularly important today that universities can guide students in the field of STEM, to explain the options they have ahead of their careers, which is not the case today.

George Terzakis, HR Manager, EFA Group, stressed that Greece does not only export feta cheese and oil but also high tech services. At this time a company of the group exports night vision binoculars to the German army, the Belgian army and the Marines of America.

He went on to say how equality for the group is not only in words but in practice and for this reason the group has as a strategic choice of an extroverted way of attracting its prospective employees. He noted that great importance is attached to the group’s presence in Higher Education Institutions and the result is to attract women with a high level of education, as 67% of women working in the group hold higher education degrees. Finally, as he said, the company promotes women in positions of responsibility in all the companies of the group, he characteristically mentioned that 4 years ago the percentage of women was 20% now has risen to 30%.

Konstantina Tsiapali, Secretary BoD HETiA was the coordinator of this panel.

The 10 largest fundings that Greek Startups “raised” in 2021