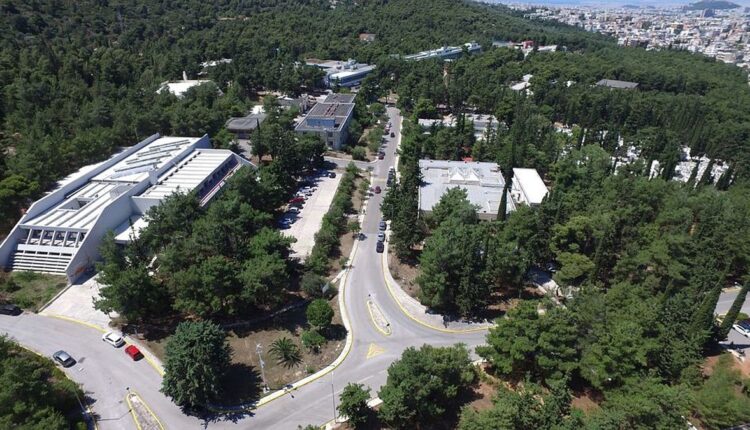 StartupperMAG attempts to record the map of the most important research centers in the country that operate as independent institutions, but under the supervision of the General Secretariat for Research and Innovation, in which Greek researchers engage in the production of new knowledge using state-of-the-art science and technology but also in the application of this knowledge in practical uses for the benefit of society.

For the residents of Agia Paraskevi, the green area of ​​600 acres of “Demokritos” has been a benchmark for 60 years. The National Centre of Scientific Research was founded in 1961 as the Center of Nuclear Research “DEMOKRITOS” and since 1963 organized the first postgraduate studies in Natural Sciences in Greece. Today it is the largest interdisciplinary research center in the country with five independent institutes and about 700 people as research staff and has evolved into a dynamic and productive innovation ecosystem.

The activities of its research teams have an international impact and great achievements covering a wide range of scientific fields with special emphasis on issues of artificial intelligence, 5G telecommunications, nanotechnology, sensors and Internet of Things technologies, as well as issues related to environment, energy , climate change, biotechnology and security.

The center has adopted technology transfer policies, attracting private investment in research from international companies with the aim of co-developing patents, and has successfully implemented pioneering industrial scholarship programs. The strategy of “Demokritos” promotes entrepreneurship with special emphasis on the initial, precarious stages of creating a Startup, while the research staff, as a whole, is encouraged to participate in Spin-offs.

“Lefkipos” Technology Park of “Demokritos” currently hosts about 40 Startups (such as Nanoplasmas, Cyrus for hydrogen, Linked Business, which won the award of the NBG Business Seeds Innovation and Technology competition of the National Bank for in 2019 etc.) as well as research centers of large international companies such as Tesla. The digital innovation hub AHEDD (Attica Hub for the Economy of Data and Devices) which supports the digital transformation of Greek companies, operates along with ” Lefkipos”.

The “Demokritos” campus is being rebuilt with funds from the European Investment Bank and the PDE and will soon be a “smart”, “green” city. Today, the director and chairman of the board of the center is Dr. George Nunesis, who studied Physics at EKPA and the University of Minnesota, and a career, besides “Demokritos”, at MIT and CNRS.

The Alexander Fleming Biomedical Sciences Research Center (B.S.R.C) is internationally recognized for its pioneering research in understanding the molecular and cellular basis of diseases ( autoimmune diseases, cancer, neurodegenerative diseases, etc.), but also for new approaches to addressing them. It includes two institutes (Fundamental Biomedical Research and Bioinnovation) and aims to translate basic research into innovative applications in biotechnology and the development of new drugs.

Fleming’s state-of-the-art technology infrastructure provides services in biomedical research,in the academic and private sector in Greece and abroad, such as the Experimental Animal Unit, 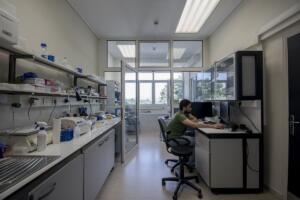 which is the largest of its kind in Greece, as well as the Transgenesis and Cryopreservation, Genomics, Proteomics, Flow Cytometry, Bioimaging, MicroCT, Endoscopy and Histopathology Units. Fleming has already submitted 11 copyright applications and has processed more than 550 Material Transfer Agreements in Europe, the USA and Asia for animal disease models, genetic tools and innovation products created and developed at the center.

The center, that coordinates two National Research Infrastructures: InfrafrontierGR / Phenotypos and ELIXIR-GR, which are active in the generation, archiving and phenotypic characterization of animal models of human disease and bioinformatics / bio-computing resources respectively, is a national hub at the European Mouse Mutant Archive – EMMA, while participating in other national infrastructures, such as BioImaging-GR, which aims to provide high quality imaging services, and the Research Infrastructure for Personalized Medicine (pMedGR).

In 2006, “Fleming” founded the first export-spin-off, Biomedcode Hellas SA, which provides pre-clinical drug evaluation services to international pharmaceutical and biotechnology companies, while also developing new alternative in vitro experimentation methods, such as organ-on-a -chip “, which simulate the function of human organs. The external, competitive funding of the center amounts to 75-85% of its total budget annually and comes from highly competitive sources, such as the European Research Council (4 grants for the period 2013-2021), Marie Skłodowska-Curie, Horizon 2020 and NSRF. ‘Fleming” currently employs 160 people, including 24 researchers of all levels. Dr. George Panagiotou is the Chairman of the Board and Director.

The Biomedical Research Foundation of the Academy of Athens (BRFAA) started its research activities in 2004 in a modern building complex of 32,000 square meters, 3 km from the center of Athens, being the only center in Greece and one of the first Translational Research Centers in Europe. The fundamental principle on which it was created is the combination of basic and clinical research, which is why it is considered the largest “School of Biomedical Research” in Greece, which supports more than 450 researchers of all no levels.

It has the most modern unit of proteomic and genomic analysis, a highly organized unit of experimental animals and a six-bed day clinic specializing in cardiovascular, metabolic, hematological and cancer diseases. The Public Umbilical Cord Blood Bank and the Environmental Health Center operate under its auspices. BRFAA holds 12 patents in the fields of prenatal diagnosis, neurodegenerative diseases, cancer, kidney disease, etc., and since its inception has participated in more than 300 research projects, of which 85 in the EU and the European Economic Area ( EEA).

In addition to national and European grants,BRFAA research is also funded by other international sources, such as the US National Institutes of Health (NIH), the March of Dimes, the Human Frontier Science Foundation, etc., as well as pharmaceutical and biotechnology companies. The chairman of the board of the institution is the academic Loukas Papadimos.

Pasteur Hellenic Institute is the first Institute of Biomedical Research and Public Health founded in Greece and from 1920 until today remains faithful to its mission and the principles of Louis Pasteur’s scientific heritage, that is the prevention and treatment of infectious diseases through basic and applied research, education and the provision of public health services. It is a non-profit research institution, the only one with a dual character research center and body that serves public health, which is supervised by the Ministry of Development and Investment and the Ministry of Health. It is a member of the International Network of Pasteur Institutes and has strong ties with Pasteur in Paris and other institutes in the network covering almost the entire globe such as North and Central Africa, SE Asia, Europe and Canada.

It has a critical mass of highly specialized scientists who have achieved excellence in both areas of research activity of the institute, namely in infectious diseases (microbiology and immunology of 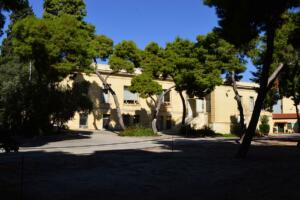 infections) and in the neurosciences (autoimmune, neurodegenerative and neuromuscular) with the Ministry of Health and international organizations, such as WHO and the ECDC, for the surveillance and epidemiological control of major viral, bacterial and parasitic infections and the treatment of epidemic diseases with high mortality and seven technological infrastructures (such as the Department of Animal Models for Biomedical Research and Transgenic Technology, Advanced Optic Microscopy Unit, etc.),whose work contributes substantially to the competitive translational and basic research conducted in their laboratories, while providing specialized services to third parties.

In the context of the contribution to public health, in the Pasteur Hellenic Institute there is a diagnostic department for the immediate diagnosis of various pathogens for humans and animals, which serves the Ministry of Health, public hospitals and private clinics. The activities of the institute also include the operation of a vaccine production unit. The Chairman of the Board is the Emeritus Professor of Biology National and Kapodistrian University of Athens Mrs Fotini Stylianopoulou.

The Hellenic Center for Marine Research (HCMR) is a public research organization, operates as a Legal Entity under Public Law, was founded in 2003 with the unification of the National Center for Marine Research and the Institute of Marine Biology of Crete based in Anavyssos in Attica, while it has modern facilities in Crete (“Thalassokosmos” complex in Gournes, Heraklion) and in Rhodes. The center has three institutes, three research vessels of different sizes, which are respectively suitable for missions of different types (“AEGEAN”, “FILIA” and “ALKYON”), a manned submersible (“THETIS”) and two remote-controlled submarines ( ROV SUPER ACHILLE, MAX ROVER) for conducting marine research. It is, is the largest marine research organization in the eastern Mediterranean and employs a total of about 700 people, about 40% of whom are permanent staff. The center participates in five pan-European research infrastructures (ESFRI): EMSO-ERIC, EuroArgo-ERIC, EMBRC-ERIC, LifeWatch-ERIC), while it has a constant participation in the European research framework programs (FP5, FP6, FP7, Horizon 2020 etc.).

The establishment of Spin-offs is a sector that was recently developed and matured in HCMR. The completion of four Spin-offs has already been completed or is imminent (Aquatic Biologicals for

the provision of advanced health services in fish farming, MARINE INNOVATION DEPOLLUTION and SERVICES-MINDS for the protection of aquatic ecosystems, FresQo for the instant and not damaging testing of the freshness of any catch and the INOVATIVE APPLICATIONS OF ARTIFICIAL REEFS for the study and construction of parks and attractions for recreational diving, as well as the elaboration of feasibility studies etc. HCMR has a valuable contribution, of national importance, not only in the pure research field, but also as a state advisor for the adoption of policies regarding the conservation and utilization of fishery, biological and natural resources, the support of major technical projects (eg Rio-Antirrio bridge), the finding and salvaging of ships and aircraft after accidents etc.  Dr. Antonios Magoulas is Chairman of the Board and director.

National Observatory of Athens
Understanding of nature and of human

The National Observatory of Athens is the first research institute of the modern Greek state (1842). The original building of the Observatory was designed by the famous Danish architect and outstanding representative of neoclassicism Theophilos Hansen and was built on the hill of the Nymphs, next to the hill of Pnyx, where one of the oldest observatories of the 5th century was located.

Apart from the historic site of NOA in Thissio, which houses the administration and the Geodynamic Institute (GI) and clocks, telescopes, various organs of the 19th century and the historical library, the NOA has major research infrastructures in Penteli, which hosts the Institutes of Astronomy, Astrophysics, Space Applications and Remote Sensing (IAASARS) and Environmental Research and Sustainable Development (IESDR) and the historic Newall Telescope, in Kryoneri, Corinth, where it hosts the Aristarchus Telescope 2.3 m., the second largest in mainland Europe, and in Antikythera (PANGEA), where the research infrastructure is dedicated to the study of climate change.

NOA institutes conduct basic and applied research in the fields of Astronomy, Astrophysics, Cosmology, Space Sciences and Remote Sensing, in the study of climate, weather and environment, through integrated / interdisciplinary approaches and in the fields of Seismology, Physics of the Earth’s interior, Geophysics, Tectonic Plates, Volcanology, Geothermal research, Neotectonics, Seismotectonics and Earth Geophysical Observations.

An important initiative of NOA is the establishment of the “Center for Security, Safety and Hazards Risk Resilience – NOA-AEGIS”, a comprehensive scientific hub that aims to conduct innovative research and to offer, nationally and globally, innovative scientific services and forecasting tools, detection, monitoring and management of natural and man-made disasters, utilizing the extensive space and ground infrastructure of CEPOL as well as synergies with national and international bodies and organizations (Copernicus, ESA, NASA, WMO, UNESCO, etc.). The director and Chairman of the Board of the center is the professor of Physics at the Aristotle University of Thessaloniki, Emmanuel Pleionis.