HELLENIC PETROLEUM: Important actions for the regeneration of fire-stricken areas

The Group carried out anti-corrosion projects for the regeneration of the environment in Varibobi, Attica 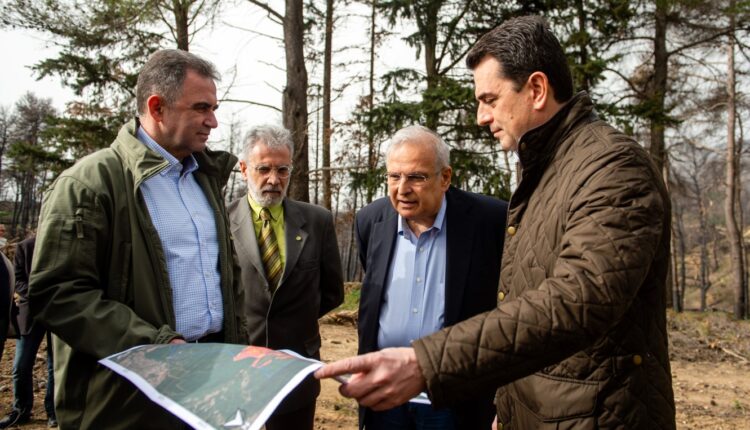 The critical anti-corrosion projects for the shielding of the burnt area and the regeneration of the natural environment in Varibobi, Attica, which were undertaken and implemented by the HELLENIC PETROLEUM Group, were delivered by the President of the Board of Directors, Yannis Papathanasiou, to the competent Minister of Environment and Energy, Kostas Skrekas, during a short event held in the fire-stricken area.

The largest energy group in the country, responding to the invitation of the State and the needs of society, undertook with a budget of 3 million euros the implementation of extremely important anti-corrosion projects, through the institution of the Contractor of Restoration and Reforestation. Specifically, it has successfully completed the works in Attica in an area of 3,197.40 acres, within the national park of Varibobi and is expected to deliver in the near future the corresponding projects in Schinos of Corinthia in the Gerania Mountains, in an area of 17,214 acres, part of which is located in a protected area NATURA 2000.

The works in Varibobi, which extend from the north side of the former Royal Palace, including the center of Varibobi, to Kato Varibobi, were carried out on the basis of a study by the Directorate of Reforestation of Attica and are 100% ecological, with the construction materials coming exclusively from the burnt trees of the area.

It is worth noting that the anti-corrosion works in Varibobi, Attica, include 233,486 current meters of logs, with the placement and fixing of logs along the spatial curves, according to the relief of the ground on the slopes of the watersheds of the streams.Also, 20,913 current meters of pruning grids, by collecting, placing, compacting and fixing the branches on the slopes of the river basins. Finally, 1,503 square meters of logs, with the construction and installation of wooden dams made of logs, within the dormitories of the secondary and tertiary streams, which contribute to large streams, in order to retain the sediments.

For their completion, special crews participated, consisting of experienced professionals and scientists, while daily for over 3 months 75 people were in the field on average, recording more than 30,000 working hours. The projects in Schinos of Corinthia, which are in the final phase of completion, are implemented on the basis of a study carried out by the Directorate of Forests of Corinth. These are also 100% ecological interventions, with the materials of the constructions coming exclusively from the burnt trees of the area.

The anti-corrosion projects were implemented with the aim of retaining valuable forest soils, preventing erosion and limiting the descent of sediments, in order to enhance and assist the natural regeneration of the forest and to protect the areas, as far as possible, from severe flooding.

“Today I had the opportunity to see up close the anti-corrosion projects that have been completed in Varibobi. After the devastating fires of last summer, we are making a huge national effort, which brings results, for the immediate reconstruction of the fire-stricken areas.Hellenic Petroleum, with a high sense of social responsibility, embraced from the first moment the innovative institution of the “Contractor for Rehabilitation and Reforestation”, offering 3 million euros for the implementation of anti-corrosion projects in Varibobi and Schinos of Corinthia. The government with plan and determination responds to the urgent need to adapt forest ecosystems to the effects of the climate crisis and to the regeneration and protection of our natural heritage and to pass them on to future generations.”, stated the Minister of Environment and Energy, Kostas Skrekas, during the delivery of the anti-corrosion projects in the area of Varibobi, sponsored by the HELLENIC PETROLEUM Group.

“Over the years, the Hellenic Petroleum Group has responded sensitively to the needs of the communities in which it operates.After the devastating fires of the summer and faithful to our commitment to contribute to the containment of the effects of the climate crisis, we implemented these critical anti-erosion projects in order to accelerate the natural regeneration of burnt forest areas. The HELPE Group will always be present where there is a real need, actively supporting the Greek society and economy. And that’s not a promise. We consider it our moral responsibility and duty to contribute to the sustainable future of Greece.”, said the President of the Board of Directors of the HELLENIC PETROLEUM Group, Yannis Papathanasiou.

Over 1,7 billion euros to companies participating in Horizon 2020