Greece will receive support of 125 million euros, a new funding that will help to reap economic benefits, further enhance IT skills and create a friendlier environment for citizens and entrepreneurs to attract additional investment to the country 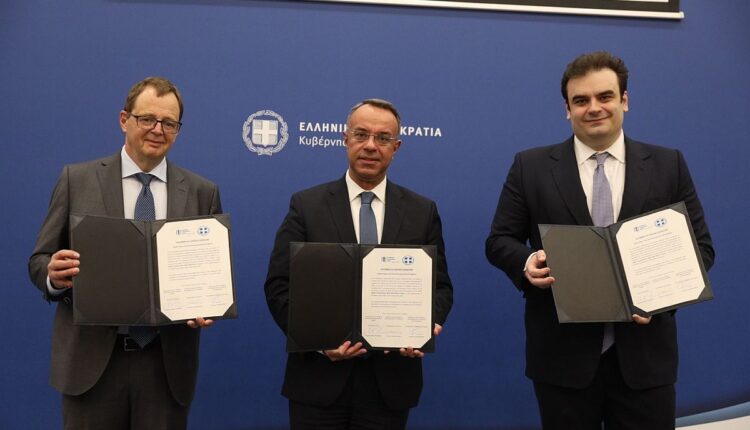 The European Investment Bank (EIB) has announced a sum of 125 million euros to support digital projects of the Ministry of Digital Governance. The contract was signed in Athens by the Minister of Digital Governance Kyriakos Pierrakakis, the Minister of Finance and EIB Governor Christos Staikouras and the EIB Vice-President for Greece, Christian Kettel Thomsen, with the aim of digitally upgrading the structures and services of the Greek State.

The funding will be directed both to projects from which all citizens will benefit directly and to projects of indirect benefit in all individual areas of interaction between the citizen and the public sector. In the first category, there are projects such as “Wi-Fi GR” for the development of 3,000 hotspots in public places throughout Greece and the digitization of health services, while in the second category, projects such as the implementation of a network of videoconferencing services in courts and penitentiary institutions in the country. Particular focus is placed on innovation, the development of digital skills by citizens and adaptation to the needs of the Fourth Industrial Revolution, with funding for actions such as the National Digital Innovation Hubs.

The program, with a view to be implemented in the next five years, will contribute to the plan for the complete digital transformation of the Greek State and the provision of services aimed at serving and the positive experience of the citizen.

“With this framework agreement, the European Investment Bank will provide 125 million euros to finance the promotion of digital transformation in a wide range of public services. Over the next five years, the projects to be financed – extending to the areas of public health, social security, justice, transport, telecommunications and the media – are expected to facilitate transactions with the public sector and improve the lives of Greek citizens. These are important projects that will lead to the creation of new, as well as the improvement of existing, administrative mechanisms, with immediate and long-term benefits for households, businesses and the economy across the country.”, said the Minister of Finance and EIB Governor, Christos Staikouras.

“2022 is the year when the exponential progress of digital transformation will begin to meet the implementation of major technology and information technology projects. Citizens already have more digital capabilities in their hands and, as we move forward with the implementation of our design, they will have even more, even better, with even greater added value in their daily lives.

To achieve this, we are determined to make the most of the financial tools we have in our hands to upgrade the country’s digital infrastructure. The announcement by the European Investment Bank is important for two reasons. On the one hand, because the resources approved will be directed to particularly critical digital projects and, on the other hand, because it reflects the trust that Greece enjoys internationally in the field of digital transformation.”, stated the Minister of State and Digital Governance, Kyriakos Pierrakakis.

“The pandemic has highlighted new challenges across Europe, and demonstrated the need for innovation, the creation of new best practices for public administration and the acceleration of digitalisation. Greece shows that it has an important vision and ambition to work to ensure that the digitization of public services is a national priority. The improvement of digital technologies in the Greek public sector will contribute to the strengthening of coordination and effective cooperation between state bodies and public services, while creating a friendlier environment for citizens and entrepreneurs, and will act as a catalyst for attracting further investments in the country. Through this initiative, it is the first time that the European Investment Bank has supported the digitization of the public sector anywhere in Europe, but also around the world, by implementing a specialized and targeted programme. Our colleagues from the technical field have learned valuable lessons from joint preparations and in-depth research, which will be shared with the aim of strengthening the implementation of similar programmes in other parts of Europe.”, noted the EIB Vice-President for Greece, Christian Kettel Thomsen.

The Greek Mantis proceeds to a merger with the Ecovium Group