ESG, female entrepreneurship and SMEs at the heart of CompeteGR 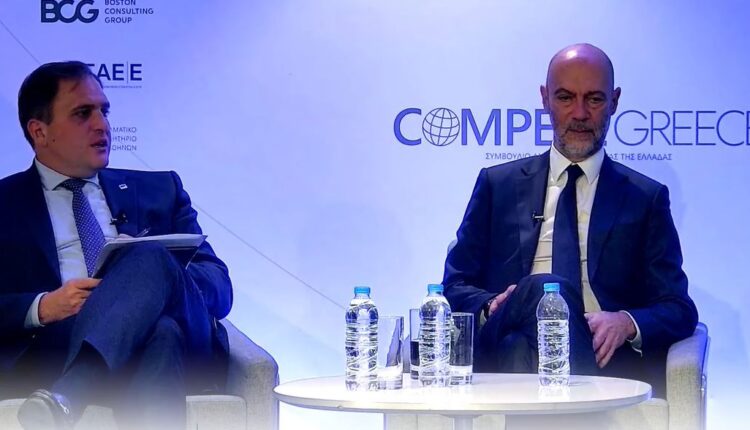 In the extremely interesting dialogue on competitiveness, innovation and the digital transformation of small and medium-sized enterprises participated representatives of entrepreneurship institutions of our country, small and large enterprises, the Deputy Minister of Finance, Theodoros Skylakakis and the Governor of the IAPR (Independent Authority for Public Revenue), George Pitsilis.

The main conclusion of the event is that small and medium-sized enterprises in Greece, despite the basic structural problems and major challenges, such as sole proprietorships, their small footprint on the market, problematic access to finance and small economies of scale, can have faster growth and more opportunities through easier access to new technologies and digital services from all over the world, but also through networking and cooperation with other companies in Greece and abroad. At the same time, they can more easily manage new regulations, such as the ESG for example, and thus gain competitive advantages.

Finally, they can more easily gain unified access to suppliers, for example through broader alliances, provided of course that there are the necessary tools for support, training, networking and funding on the part of the government and by the entrepreneur as a whole from the entire business ecosystem.Dr. Venetia Kousia, General Manager of CompeteGR,opened the event and stressed the poor performance of Greece in terms of the competitiveness of small and medium-sized enterprises, since many of their founders started businesses for the wrong reasons, without having the ability to manage a team and with a lack of vision. It has particularly been in the context of the government’s support for entrepreneurship, especially in the last two years, which is moving in the right direction, which will motivate new stakeholders to try.

Innovation and technology are the keywords

“Countries are recovering as quickly from the crisis as their competitiveness allows, while a critical magnitude in any case is the potential to generate innovation at all levels and especially for the production of new products and services”. This finding was also made through the change of the productive model of our country from introversion to extroversion and the presentation of products and services that can compete on a global level. “Innovation is the driving force for development and prosperity.”, said Simos Anastasopoulos, President of CompeteGR.

The consolidation of a stable economic and investment environment by the government, the integrated plan from the European Recovery Fund, as well as the effort to integrate innovation into entrepreneurship has attracted foreign investments in our country and has given Greece the characterization of a best practice at a global level. At the same time, the transition to a digital, green and sustainable economy will further improve our competitiveness, added Mr. Anastasopoulos.

In fact, CompeteGR in collaboration with the Delphi Economic Forum will organize the Global Innovation Summit for 2022 in Athens, putting our country on the global investment map for good and further improving the image of our country internationally. The President of the National Chamber of the Network of Women Entrepreneurs and First Vice President of the Athens Chamber of Commerce and Industry, Mrs. Sofia Efraimoglou – Kounenaki, said that small and medium-sized enterprises want the support of all of us in order to strengthen their competitiveness. Two factors are important for their future.

The first is innovation and technology, which is dramatically changing the data in the business environment and can give them a global boost. The second factor concerns the emergence of women’s entrepreneurship, which can give a different perspective and new dimensions to the issue since it is a driver of economic growth. This is confirmed by a recent report by the Boston Consulting Group which states that if women were to participate equally in entrepreneurship, global GDP would be 3 to 6 % higher.

The President of the Athens Chamber of Commerce, Giannis Hadjitheodosiou, said that the vast majority of businesses in Greece are very small (1-9 people) while 5% are small (10-49 employed) with micro-enterprises lagging behind in many competitiveness indicators and and the integration of new technologies that prevent them from growing, especially in the manufacturing sector.

Despite the fact that there are many actions of empowerment, collaborations – synergies, digital transformation and financing, however, since the funding passes through the banking system, this does not reach small businesses, noted Mr.Hadjitheodosiou.

The Deputy Minister of Finance, Theodoros Skylakakis, in his statement said that the size of a business should not affect its treatment by the state and the banking system but on the other hand the so-called economy scale should encourage business partnerships and mergers since it is an important element of competitiveness.

He also pointed a characteristic of Greek small, medium and large enterprises: these are smaller in size than their foreign counterparts (since there are many freelancers in Greece) while at the same time there is a relatively large undeclared business activity, something that inevitably excludes them from bank financing and makes it difficult for them to access other productive resources. All of the above remove competitiveness points from Greek small businesses while on the other hand the banking system does not focus on small and medium-sized enterprises.

The Governor of the IAPR, George Pitsilis, taking stock of the actions of the Independent Authority for Public Revenue, focused particularly on the IAPR’s goal to reduce the time spent by a small and medium-sized enterprise in fulfilling its tax obligations, since in this way entrepreneurs will have more time to take care of their companies.

This has been done and is being done through the digitisation, simplification and standardisation of dozens of procedures and services and, of course, through the fight against bureaucracy. Mr. George Pitsilis also stood on the new digital service myAADE, where the citizen can communicate digitally with over 90 tax offices while the support of businesses in the midst of the pandemic was done and implemented digitally. Noteworthy was the reference to the digital invoice platform, which has issued more than 2 million invoices to date, while very soon the entire process of starting a business will be done digitally, as will the cease of its operations.

To watch the event on the CompeteGR website here