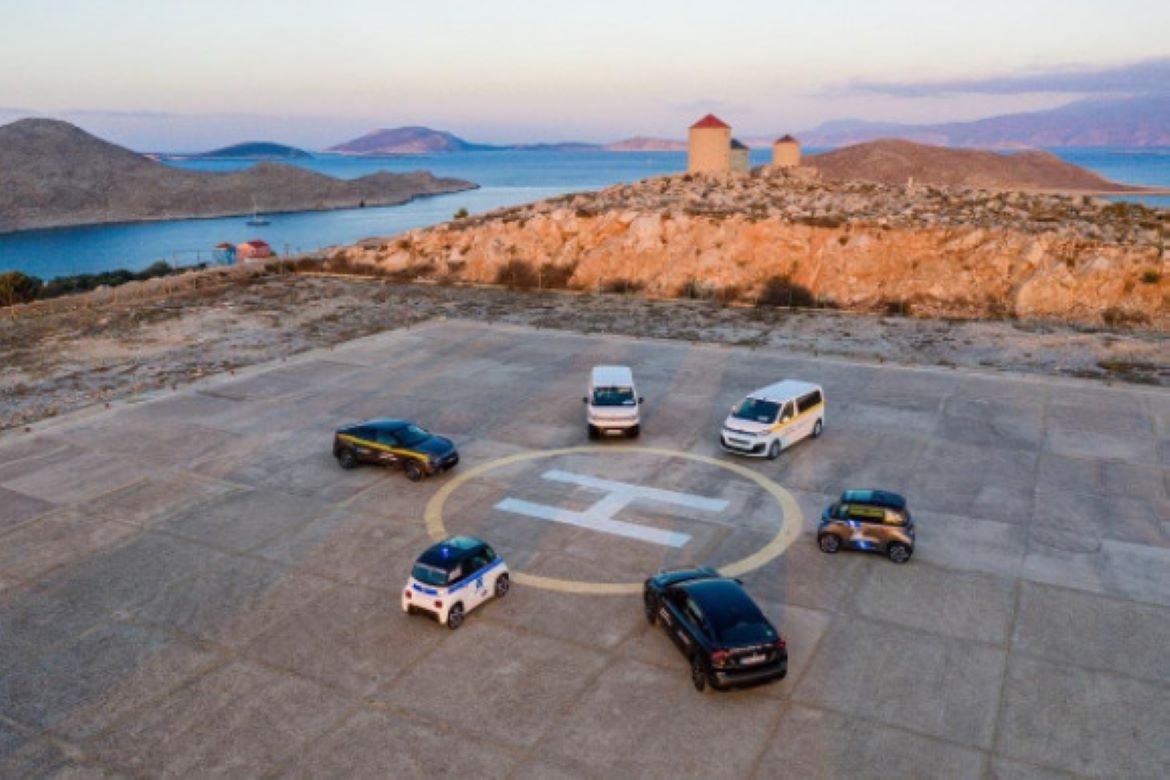 The island of Halki is the first Gr-eco Island to have the role of “Model” for sustainable development, technological progress and the well-being of the residents, as it is now the first scale of applications for solutions that will lead us to the future. Halki will be the first energy-delignified island and will cover all its transport needs using sustainable electricity transportation.

Deepening the Greek-French friendship and the excellent interstate relations between the two member countries of the European Union, the French Embassy has an active role in the Halki project.Its presence in the role of guardian for the implementation of this pioneering project is of high importance, as this seals the close cooperation between the two countries

The island of Halki enters the era of sustainability and is transformed into a model of “green” economy, innovation and sustainable mobility through the cooperation of Greek and French businesses. The companies participating in the project are Syngelidis group and Citroën, ALD Automotive, Akuo Energy Greece, Omexom/Vinci Energies, as well as Papastratos, DEI, VODAFONE.

Electromobility, with the parallel creation of charging stations, powered by energy coming from renewable sources, contributes decisively to the reduction of the climate footprint of transport and human activities in general, while at the same time improving people’s quality of life.

Syngelidis Group and Citroën, on the island of Halki, proceeded to the electrification of the fleet of vehicles of public bodies, donating new zero-footprint electric vehicles to replace the old polluting vehicles, fully covering their needs. It is also particularly important that Syngelidis Group and Citroën are committed to offering residents and businesses in Halki the opportunity to purchase electric vehicles at special prices.The transition to green and smart mobility will be additionally supported by tax and financial incentives of the Ministry of Environment and Energy. The first vehicles of Citroën offered as a donation by the Syngelidis Group to meet the needs of the Municipality, the Police and the Coast Guard, are electric passenger and commercial vehicles and more specifically the models: AMI, ë-C4 C- Cross, ë-SpaceTourer and ë-Jumpy, satisfying the needs of the respective bodies.

With this donation, the current transport system of the Municipality is modernized, and incorporates a new technological and green way of transportation, in the service of comfort and flexibility in use: the transportation in “ë-Comfort class”.

At the same time, the Security Forces in Halki now have means of transport to meet their needs. In fact, they are purely electric, smart and extremely flexible. These are the new AMI – Citroën’s revolutionary solution for sustainable urban mobility – which were handed over to the Police and the Coast Guard something exclusive worldwide!The only Citroën AMI in the world that carry the necessary equipment as defined by the Security Forces are found in Halki.

This will be the eternal legacy of the willingness shown by Syngelidis Group and Citroën towards evolution, contributing to Greece’s progress in every sector and especially in that of the conversion to a “model” country.

“We are really happy to participate in this excellent project on the island of Halki. This partnership is fully in line with the spirit of Citroën, a brand that dares and innovates, that is closely associated with people in their daily lives and mobility.We are committed to making electromobility accessible to all and believe that this is a source of progress in society. We are very proud to contribute to the transformation of Halki into a green, smart and sustainable island.” said Vincent Cobée, CEO of Citroën.

“At Citroën and the Syngelidis Group we are extremely proud to be involved in this very important project, which is taking place on the island of Halki. Supporting the progress of society, Citroën offers a fleet of new electric vehicles that replace vehicles with conventional engines used by the island’s operators. The fleet of new electric cars serves all the needs of the Municipality, the Coast Guard, the Police and the Energy Community of Halki. In addition, through an integrated plan for the development of smart and climate-neutral mobility, we will provide residents and businesses operating on the island with the opportunity to purchase zero-pollutant electric vehicles at affordable prices.

The implementation of the project began, making Halki the first GR-ECO ISLAND. The inhabitants of the island will have a significant improvement in their daily lives with less noise, better air quality, a cleaner environment, combined with low usage costs. With this initiative, Greece embraces the future and the energy transition to tackle climate change.It is a first step and we, at Citroën, are proud to be involved. Citroën and the Syngelidis Group have evolution at the core of their philosophy. With Halki, we are expanding the transition towards sustainable mobility in Greece and leading the way forward!” said Philippe Narbeburu, Citroën Director of European Operations, Stellantis Group

“We are very happy and proud of the contribution of Syngelidis Group and Citroën to the important project taking place on the island of Halki. In harmony with the climate footprint reduction targets set in the framework of the Action “Halki Green – Smart Island”, we resolutely support the sensitivity shown by the greek government, the French Embassy and the French business community and undertake the promotion of zero-emission electrical mobility”.

Having the evolution of society always at the core of our philosophy, following the strategy of the Brand “Electric for All”, we participate in the pioneering project for the transformation of Halki into a model island of autonomy and sustainable transportation, aiming at an integrated “green transformation” that has a direct and positive impact on the daily life of the island’s residents and businesses. In Syngelidis Group and Citroën we do not stay in words, we proceed to actions, we democratize electromobility and we lead the future from Halki!” noted Polychronis Syngelidis, Managing Director of Syngelidis Group.

“Citroën, which for more than 100 years has had as a “vision” to make motoring accessible to all, today makes electrification accessible to the residents of Halki. It does this by presenting the “democratization” of electromobility, offering the possibility of integrated and obviously pioneering “green transition” with which Halki will be able to “live” now in the future.

The donation of utility vehicles to local public bodies, as well as the ability of residents and businesses of the island to be able to buy Citroën electric vehicles at factory cost, is a tangible proof of the willingness of Citroën and the Syngelidis Group in general, in the face of the country’s progress and its shift to sustainable mobility.The importance of the project delivered in Halki, is understood since it is a state commitment and ultimate goal, to get to talk about the GR-eco Islands having already delivered the first one. Citroen’s emotional ties with Greece were the guide for the active participation of the French company in this great project”, added Dimitris Kavvouris, Chief Operating Officer, Citroën & DS Automobiles of the Syngelidis Group.