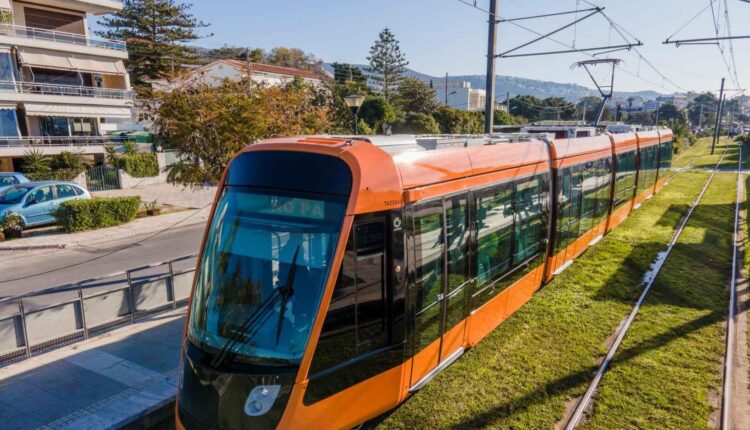 Alstom’s new generation Citadis X05 trams begin their operation with passengers in Athens, in a network that extends from the center of Athens to Piraeus. It is estimated that over 60,000 passengers will board the Citadis trams every day. Prior to the start of their operation, the 25 trams successfully completed dynamic tests without passengers, with a total distance of more than 15,000 km in the urban network of Athens, ensure their safe and reliable operation.

Despite the difficulties brought about by the pandemic, the company has managed to deliver these trams without delays. Alstom is committed to offering an improved passenger experience, with comfortable and modern rolling stock, providing increased capacity. The Citadis X05 is the most advanced version of a very successful Alstom tram series, which can also be found in cities such as Nice, Paris or Sydney.

Now these ultramodern vehicles came to Athens. During the recent tests, the Citadis X05 proved once again its reliability and performance, while showing that its design and class fit perfectly in Athens, said Stavros Vlachos, CEO of Alstom in Greece.

The 25 trams, commissioned in 2018 by ATTIKO METRO S.A., are the first Trams of Alstom that circulate in Greece. They will run at a maximum speed of 70km/h, on the existing network of the city, as well as on any future extensions. In addition to the construction and supply of trams, Alstom is responsible for on-site testing, training and three-year warranty services, as well as vehicle parts.

Ensuring reduced energy consumption by 25%, the modern Citadis X05 trams complete the existing fleet of light railway vehicles for use in the Athens and Piraeus network. The trams of five wagons have a length of 33.42 meters and a width of 2.40 meters, with a maximum capacity of 294 passengers.

Double doors along the entire length of the tram ensure increased accessibility. This new generation of the Citadis series offers an upgraded passenger experience, with 20% more glass surfaces, LED technology for mild, homogeneous lighting, optimised air conditioning and ventilation, as well as route information on large screens through a telematics system.

Worldwide, 3,000 vehicles of the Citadis series have been sold by Alstom, in 60 cities. The Citadis trams have travelled more than 1 billion kilometres and carried 10 billion passengers since the first tram came into operation in 2000.

In addition to Athens, the advanced version of the Citadis series – Citadis X05 – has been ordered for use in cities such as Sydney, Paris, Nice, Avignon, Caen, Lussal and Frankfurt.

Emirates: 25 years of presence in Greece

EUROBANK: The Greek bank transformed into a startup!