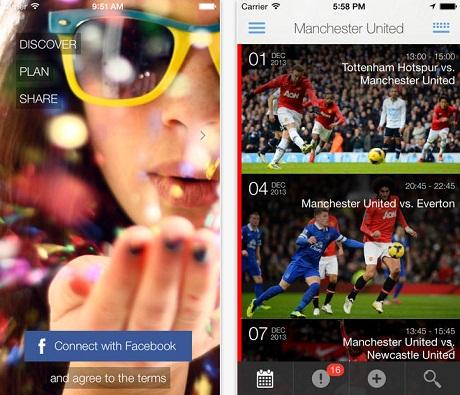 The collaboration announcement coincided with the Calendize Sports app for iPhone that the company has just introduced, especially for “die-hard” football fans, enabling them to follow their clubs’ or leagues’ favourite games and events. Heintze and Hansen, football legends back in their home country and famous among top european football leagues, will help Calendize to reach out to football fans, boosting its visibility among them.

Calendize was started up two years ago from Danish entrepreneurs and Cypriot investors in an effort to deal with “the constant and ongoing struggle of calendars excess around the Web“, as Jacob Beckmann, one of Calendize founders puts it for EMEAstartups.com, and in order to offer an application that will help users connect with events and simplify finding and planning an event through a mobile app.

After downloading the app, user is able to browse through different calendars, pick their favourite events, add them in their own calendar, follow them and then get live feeds for the events they follow. For example if you are following your favourite football team’s calendar you get live information about lineups, score, substitutions etc., even live pictures through a Calendize partnership with Getty Images. Apart from a very visual-experience-oriented app, Calendize is also a social app, allowing their users to share the events they follow or their personal schedule.

Even though the bigger plan for Calendize is to add applications for different types of events, such as music concerts or culture festivals, so far the startup has only released its Sports edition, since “people into sports are very passionate about their team and more willing to follow their calendars and updates“, as Beckmann explains to EMEAstartups.com.

Right now, the application covers all national teams, national leagues and clubs in Europe, with Calendize team releasing one new sports calendar every week and working in other major sports for the near future.

As far as events and calendars publishers are concerned, Calendize allows them to create fully branded calendars for iOS and later for Android and the Web, to hook up with their fans and build their community. Calendize in that way promises a new communication channel for brands like football clubs with their fans in the social media era. Also, the company offers tools for publishers to share events, add photos and post comments facilitating engagement and boosting events participation, while the brandable calendars can also be marketed via existing channels such as the brand’s website, page on Facebook, at the venue or at the point-of-sale. Finally, the app helps also organisers generate more revenue, by offering in-app tickets sales tools for commercial events.

So far, the a-little-over-1-million euros-funded startup has already gained significant traction between football fans, according to Beckmann. Last autumn Calendize tested the service on football fans in Denmark, England, Spain and Germany and they seem to have really taken to it.

According to a press release, the company is currently in negotiation with some of the biggest football clubs in Europe and expects to announce the first strategic collaboration in the course of the coming month. Just one of these clubs represents access to a fan base of over 10 million diehard football fans.

The collaboration with Heintze and Hansen fills into that context. The two former players will help open the doors to the big european football clubs, aiming for the startup to reach out to the clubs’ fans via the clubs by using the app. Both players coming from Denmark and having palyed for bog clubs around Europe are big brands across the continent and, as Beckmann tells EMEAstartups.com, “they will get the message about Calendize out to clubs and high-profile football players“. Hansen, currently a scout for italian Serie A club Fiorentina, described Calendize as a Twitter for football leagues and team calendars. This is the kind of message Calendize hopes Hansen will be able to promote to his sports people and clubs connections and making them interested in getting in touch with the company and the application.

“Globally, we believe there to be more than 500 million avid football fans, so the market is substantial. We have all the major football leagues, teams and matches in the app, so no matter who you are a fan of, it only takes a couple of clicks to access the club’s calendar”, Jacob Beckmann is quoted saying in the press release.