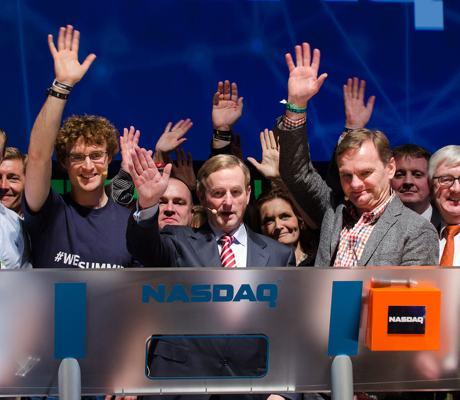 Web Summit strengthens its position as one of the top technology conventions in Europe, both as far as speakers and participating companies are concerned.

The convention started at 9:00 with Paddy Cosgrave, its founder, who gave in the beginning a brief history of Web Summit.  It began as a small startup convention in 2010 in difficult times for Ireland in the midst of the economic crisis and managed in three years to develop into a large technology festival drawing businessmen and visitors from all over the world.

In his opening speech, Cosgrave asked his audience to embrace the three values that shape the Web Summit, so as to be able to gain the most from the experience it offers:
– Share: An important part of the Irish culture is sharing and helping others.  Cosgrave asked the participants to see the others as neighbors in need and to share their experiences with them.
– Explore:  Cosgrave stressed to his audience that they are the ones who shape and reinvent the future.  He invited all the participants to explore the others’ activities as well as everything else that goes on during the festival.
– Feel that you belong: In the Web Summit, there are no hierarchies and that is one of the convention’s core values. Everything that goes on is open to everyone.

Saul Klein of Index Ventures attracted great interest with his speech when he referred to the fear of risk that has overtaken the great companies, the governments and the educational institutions, a mentality that ‘is being disrupted by the economy of innovation and VC’s.

Citing specific data as examples, he emphasized that 55% of the American and 62% of the European venture capital (VC) investments may have zero return on investment, yet they are the ones who have created the companies (e.g., Apple, Google,Microsoft, Cisco, Facebook, Yahoo, and others) accounting for 21% of the US GDP, while in Europe a similar entrepreneurial wave is gaining momentum, offering many challenges but rewarding the successes many times over.  Klein underlined the fact that businessmen and investors must learn to take risks, to understand the markets they address, to watch where demand appears and to study the human factor – only then will they succeed in a global level.

Nicola Mendelhson, in charge of Facebook for the EMEA area, also attracted the spotlights while speaking on digital marketing. She stressed the increasing significance that the mobile sector is gaining through smartphones and also through tablets.  As she said, the size of the change that modern technology is bringing is comparable to the decade of the 1950s when one communication medium (television) exceeded another’s (radio) potential.

Even Facebook must adapt to the new conditions, she stated, and that was one of the reasons that every developer of the company had to learn to develop code for mobile phones.  Facebook, she added, showed that a great company can pivot quickly and within 18 months to raise its mobile activities revenue from zero to 40%.  Facebook attracts everyday audience in numbers that are only comparable to the largest events in the world, such as the Olympic Games and the World Football Cup, Mendelhson mentioned, and characterized Facebook’s newsfeed as ‘prime time for every time’.

The Web Summits activities were topped for the first day by NASDAQ’s live opening at 13:30 Ireland time (9:30 New York time) with the opening bell being rung by the Irish Prime Minister himself Enda Kenny.

FONSENSE: ADVERTISING JINGLES ON YOUR SMARTPHONE