OPAP honors the National Basketball Team in a special event

During the event, OPAP's new advertising campaign was presented for the first time to the press representatives with the central message "When the National Team competes, an entire country competes." OPAP, Gold Sponsor of the Hellenic Basketball Federation and the National Basketball Teams, wished “good luck” to the Greek delegation, which departs tomorrow for the Eurobasket, in a special event held at OAKA.

The Greek players and the coaching team of the Men’s National Team, the management of OPAP and the Hellenic Basketball Federation, as well as former international basketball players, who have written their own history with the blue-and-white jersey attended the event.During the event, the new advertising campaign of OPAP was presented for the first time to the press representatives with the central message “When the National Team competes, an entire country competes along with them.”

“We are very happy that OPAP is associated with Greek basketball, as a Gold Sponsor of the Hellenic Basketball Federation and the National Teams. Over time, OPAP has been present in many historic moments for the sport and we hope that history will be written again. What is certain is that the players and the technical staff will give everything they have to represent Greece. I would like to wish the team every success. Our thinking and positive energy is with them.”, stressed the CEO of OPAP, Jan Karas.

“Shortly before the departure of the National Team for Milan, we join our voices to wish the “official beloved” of all Greeks, good luck in the EuroBasket. The road to Berlin is difficult, but this team has already shown that it fights hard, combining passion and talent. In OPAP’s family, the employees and agents are proud to support NBG and we wholeheartedly wish the best to the players, the coach and the teammates, and the whole mission.”, said the Deputy CEO of OPAP, Odysseas Christoforou.

“Today we present for the first time our new advertising campaign with the central slogan “When NBG competes, an entire country competes along with them”. That’s why it has OPAP, the biggest supporter of Greek sports, by its side. The aim of the campaign is to enhance the pride that all Greeks feel for the National Team, while sealing, at the same time, the successful cooperation of OPAP with the Hellenic Basketball Federation.”, stated OPAP’s Chief Marketing Officer, Yiannis Rokkas.

“All these years OPAP is the biggest supporter of sports. Now it proves it more practically with the National Basketball Team and we are very happy and proud.”, noted the President of the Hellenic Basketball Federation, Vangelis Liolios.

“We thank OPAP from the bottom of our hearts. There is no doubt that its support for Greek sports is essential. We, for our part, will give our best.”, pointed out the coach of the National Basketball Team, Dimitris Itoudis.

“OPAP is for us a formidable teammate of our team and our effort. Our promise is that we will go to EuroBasket to fight.”, said the captain of the National Basketball Team, Kostas Papanikolaou.

As the Gold Sponsor of the Hellenic Basketball Federation, OPAP, the largest supporter of Greek sports over time, actively stands by the side of the Men’s and Women’s National Basketball Teams, of all age categories.Through this three-year collaboration, OPAP aims to contribute to the efforts to maintain Greek basketball at the top of the sport internationally and to contribute to its further development. At the same time, the common goal of both sides is to further connect the sport with society. 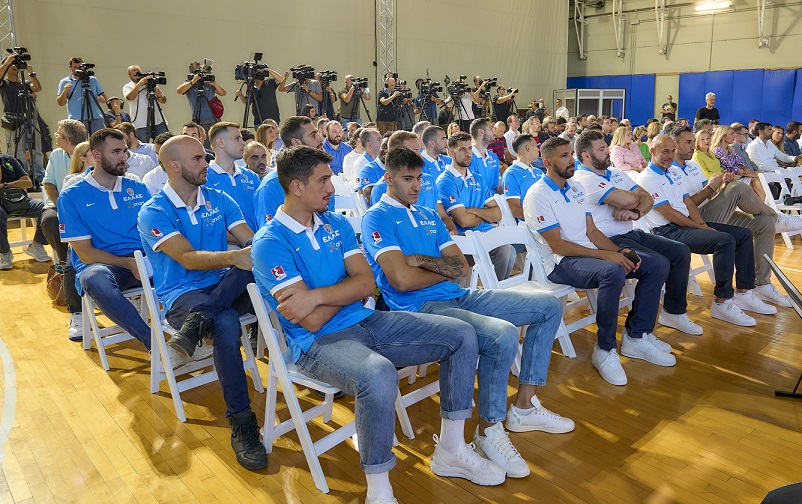 The coordinator of the event was the former international basketball player, Thodoris Papaloukas.