HONOR: First in Android Smartphones shipments in China in 2021!

The company showed an annual growth of 253.4% making it one of the fastest growing brands in the country 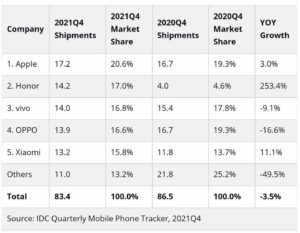 2021 was an important year of growth for HONOR in both new products and major innovations in R&D. Major drivers of the further development were the launch of the premium smartphone series such as the HONOR 50, HONOR X30 and HONOR Magic V– the company’s first foldable smartphone.

As part of the MWC exhibition in Barcelona, HONOR, on February 28, through the event “The Power Of Magic” will launch a series of new products and technologies.

Freedom Holding: Approval for expansion into capital markets and investment banking activities in the US