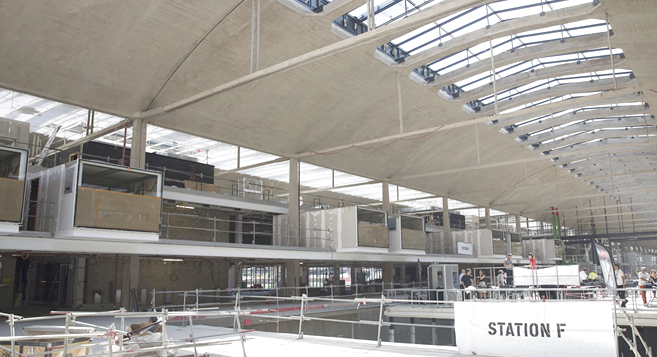 STATION F, the world’s largest startup campus opening in Paris in 2017, has just announced its first members and opened startup applications. A 34,000m2 campus for over 1,000 startups in Central Paris. The 34,000m2 campus is located in a historical monument, a former train station built in 1929 by famous French engineer Eugène Freyssinet.

The space has been renovated by award-winning French architects Wilmotte & Associés and is designed for collaboration and innovation. The STATION F campus features a startup zone with over 3,000 desks, private offices, meeting rooms, various event spaces including a 360-person auditorium, an on-site fablab, a post office, a pop-up shop, a café, a 4-kitchen restaurant and a bar open to the public 24-7. A housing extension is also being built for 600 entrepreneurs to live in nearby apartments starting 2018.

Facebook, TechShop, vente-privee, and more to be based in STATION F. STATION F has revealed that some of the first campus members will include various top-tier players from the international startup ecosystem:
– Facebook will have a presence at STATION F with details to be announced in the new year.
– vente-privee will launch its first-ever startup program at STATION F.
– STATION F will be the new home to the incubator of top French business school HEC Paris.
– Top VC funds including Daphni, Ventech and Kima Ventures will have their offices on-site.
– The on-campus prototyping lab will be operated by US-based TechShop Ateliers Leroy Merlin.

“There are no appointed mentors, no useless partners, no mandatory workshops: we believe in our entrepreneurs’ independence and ambition” says Roxanne Varza, Director of STATION F. Early stage startups can apply from December 5th to February 5th online at www.stationf.co. STATION F will open its doors in April 2017 and pricing is €195/desk/month.