The Squeeze: Honoring the “Gift of Life” 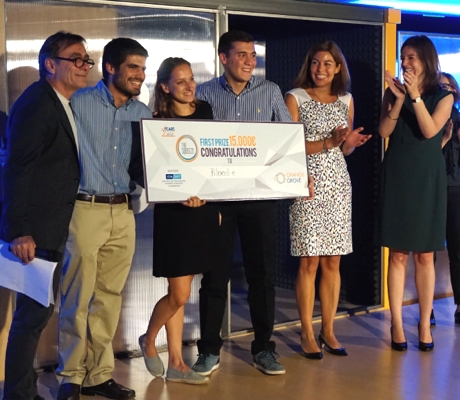 The Squeeze pitching show is a pitching competition where entrepreneurs present their ideas and battle for a prize money of 15.000€ (1st place) and 10.000€ (2nd place).

This quarterly competition is made possible with the generous support of the Stavros Niarchos Foundation as part of the “Recharging the Youth” initiative which aims to help create new opportunities for Greece’s younger generation.

This time The Squeeze took place on Saturday September 26 from 18.00-21.00, at the collaborative space of the Dutch Embassy called Orange Grove, which by the way celebrated its 2nd anniversary.

During the event, 8 of the most promising Orange Grove startups pitch their idea to a jury consisting of 4 acclaimed business professionals. Each team had at its disposal five minutes – in order to define their business goals – and five minutes to answer to tough questions and impress the judges.

The judges were well challenged, as the representatives of the startups were adequately prepared and their presentations were solid. Finally, the event kicked off after a slight delay as the place was literally swamped with people.

The startups were presented as follows:

liateR is an interactive sales solution for brands and retailers in the apparel and accessories market. It provides environments where consumers can digitally try on and buy clothing in a variety of contexts and locations (even if the store is closed), by implementing a combination of digital and physical experience – via Real Sense (Intel) and Kinect (Microsoft) technologies.

The liateR teams plans to travel to Amsterdam, participating in the famous European accelerator Startupbootcamp, in order to extend the capabilities of their platform, by transferring it to the cloud.

The global cookies/biscuits industry totals a 57 billion dollars in profit each year, an impressive amount of money.

Cookielicious plans to create its own “ecosystem” via an enviroment al-friendly distribution chain, that consists of small mobile carts, which can also operate as Wi-Fi hotspots. These carts are supplied with fresh, in-house, cookies every day, sold for €13~16 per Kg.

The company has also created a small community, whose members are able to exchange gifts (Mega-Coookies) using a dedicated mobile application.

Start by taking advantage of social media, Cookielicious plans to extend their network to Thessaloniki and launch an international campaign next month, in an attempt to evaluate their options beyond our nation’ s borders

The VitAbroad is a proposal for “Medical Tourism” and the concept of traveling to Greece for better and more affordable medical treatment.

The applicant can contact VitAbroad and make proper arrangements, select the appropriate medical center, have a surgery and then  enjoy a period of relaxation in some of the world’s most popular tourist destinations – the costs of which are included in the initial package.

Chimera has created a limited edition sparkling wine (which contains saffron), created by a special selection of grapes, cultivated on the island of the Knights, the fourth largest Greek island, Rhodes.

In order to create strong brand awareness, the members of Oinovation (Chimera’s parent company) have taken advantage of the ancient Greek mythology and created slick modern packaging – one that will not go unnoticeable.

The creators of Chimera are currently trying to patent the production process their wine, having already channeled 3,000 bottles in the Greek market and collected a total revenue of €30.000.

Blood-e is an innovative information system facilitating blood donation through the automatic connection of the donor and the hospital where blood is needed.

Their platform, in order to work efficiently, requires a mobile application that consists of two main parts: on the one side stands the hospital, which transmits the need of blood stock for a certain emergency and on the other side stands the subscribed to the app donor, who accepts the notification on his mobile phone and donates blood.

The use of the platform is free, but direct access to its database requires a subscription fee, paid probably by the hospital units.

Tipster11.com is based in Athens and aims at becoming the world’s biggest predictions marketplace.

Their marketplace provides betting advice, cooperating with experienced individuals – for a fee of course – in countries where sports betting is completely legal.

Their initial launch was in early June 2014, just before the World Cup 2014, as part of our 5 year business plan – in search of seed funding which will boost product development as well as marketing and promotional activities.

It discovers and suggests people with appropriate expertise and love for animals, able to accommodate your little friends, while you are away on a trip or for some reasons not able to perform your duties – as an owner – sufficiently.

The company “soft launched” in July, starting from Attica, offering to all interested Individuals a reward of €15 per day, while keeping their fee at 15%. Their platform provides accommodation for dogs, cats, birds and fishes too.

Their plan is to fully launch in October  – whose program covers dogs, cats and fish or birds – is scheduled for October, in cooperation with the Viva.gr.

B2B Wave is an “e-business” ecosystem, whose purpose is the distribution of products and oversight of various services at corporate level, freeing business owners from their daily routines.

The company undertakes a “router” role, just by managing the demands of its customers in real time, through a custom-built platform.

The winner of the 4th edition of “The Squeeze” pitching event – for its innovation and uniqueness – was Blood-e, which received a cash prize of €15.000, followed by Tipster11 which settled for 2nd prize of €10.000.

The “X-ray” of the German startup scene (Infographic)