The EYWA system was created with the contribution of the National Observatory of Athens, the University of Patras and the company "Ecodevelopment" 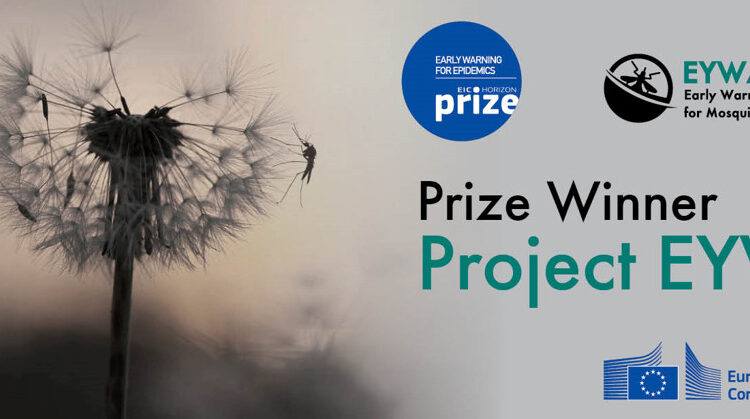 Share
The 1st Prize “EIC Horizon Prize on Early Warning for Epidemics” worth five million euros was awarded to the “EYWA” System with coordinator-partner the BEYOND Centre of EO Research and Satellite Remote Sensing of the National Observatory of Athens. EYWA’s contribution, which was awarded in the context of the international competition, can be understood through the official data published by the World Health Organization.
According to them, in one year, in 2020, 650 million cases of Malaria and Dengue fever that led to 700,000 deaths worldwide were recored. 400,000 of these deaths were children under the age of 5 who became ill in countries in sub-Saharan Africa. In addition, the phenomenon of climate change favors the migration and survival of vector mosquitoes in Europe as well. Today, a strong presence of West Nile Virus is recorded in Europe and in fact during the last twelve years a significant number of cases have been recorded in Greece, Italy, Serbia, France and Germany. However, the cases of Malaria and Dengue Fever, Zika, and Chikungunya in the above countries also show a significant increase.
The EYWA System is an interdisciplinary technological achievement that combines the sciences of Medicine, Mathematics, Earth Observation, Artificial Intelligence, Crowdsourcing, Climatology-Meteorology and environmental studies. The innovative system was designed to inform in time , predict the epidemiological risk and help control diseases transmitted by insects, the most important of which are the mosquitoes Culex, Aedes albopictus, and Anopheles.
Nine regions of Europe benefit from the EYWA system regarding the expected entomological and epidemiological risk at the level of the settlement and the Municipality of the Region. Specifically, Central Macedonia, Thessaly, Western Greece and Crete are included in them in Greece along with: Veneto in Italy, Vojvodina in Serbia, Grand Est and Corsica in France, and Baden-Württemberg in Germany. This system will also be developed in Asian and African countries, in Thailand and Côte d’Ivoire.
The implementation of the system predicts mosquito populations with an accuracy of more than 90%, indicates the settlements and municipalities where there is an increased risk of West Nile Virus outbreaks, allowing for a targeted implementation of control measures. Based on these actions, the mosquito population is significantly reduced up to 50%, compared to the average annual number of mosquitoes, achieving to almost refuce by half the cases and cases of severe disease.
The trans-European EYWA Group includes 15 partners including national reference bodies on public health and mosquito control, private, as well as research and academic institutions from 5 European countries (Greece, Italy, Serbia, France, and Germany). The two other main Greek institutions, namely, the mosquito control company “Eco-development” based in Thessaloniki and the Laboratory of Atmospheric Physics of the University of Patras play an important role in the implementation of the system.
Finally, it is worth mentioning that the EYWA scientific team is exchanging its research conclusions with reference bodies of the European Commission, such as the Joint Research Centre and the European Union Crisis Management Centre. The EYWA team also talks with the World Health Organization and similar public health bodies in Brazil and India.
1st PrizeEco-developmentEIC Horizon Prize on Early Warning for EpidemicsEYWA systeminnovative systemLaboratory of Atmospheric PhysicsNational Observatory of AthensUniversity of Patras
Share

Brio platform: Doubles its valuation to 5,5 million euros and opens a new round of investments on SeedBlink